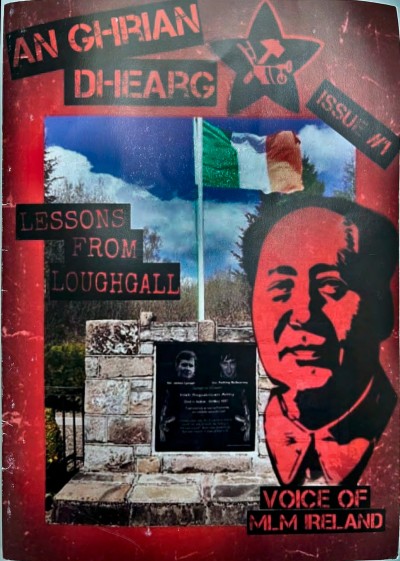 Many thanks to Mal who forwarded this document to the Archive.

This is a particularly interesting document from Irish Socialist Republicans which appears to be linked to the same group as Anti-Imperialism Ireland and the Revolutionary Housing League who are also in the Archive. If this could be confirmed that would be very helpful in organising their materials in the Archive.

This document is avowedly Maoist in ideological orientation and seeks to shape a convergence between socialist republicanism and Maoism.

For example, the editorial argues that:

Socialist Republicanism, as the application of Marxism to the conditions of Ireland, has always taken the most correct ideas from international socialism as inspiration. Just as we can see a sequence from Marx to Lenin to Mao, in Ireland we can see the continuity from Connolly to mellows to Costello and Lynagh, to the countless socialist republicans that have searched for a coherent strategy that will provide a path out of the nightmares thrown up by imperialism.

For example, it asserts that ‘In preparation for the IRA’s border campaign from 1956-1962, the key architect of the campaign, Sean Cronin, an IRA Chief of Staff, paid particular attention to Chairman Mao’s military writings and strategy as well as studying the examples of Guerrilla Warfare in Ireland, most notably from 1919-1923’

It continues: ‘While military sound, his error was in not realising the importance of the political aspects of Mao’s teachings for Revolution, and their interrelated nature of military actions, focusing instead almost exclusively on. the military elements of revolution.’

The article then suggests that:

This weakness was later criticised by then IRA Volunteer Seamus Costello… he would later play a key role in advancing the struggle for National Liberation in Ireland.

Later it suggests that “Through this study [in prison of the ‘writings of Mao’ and the ‘Vietnamese Revolution’] Costello became convinced that only a People’s War with the active political support and involvement of the Irish Working Class could achieve victory in the struggle for National Liberation and Socialism in Ireland.”

The piece suggests that Costello went to Paris to ask the Chinese Embassy there for assistance from the Communist Party of China. And this it suggests is important because ‘it suggest that Costello and sections fo the Republican Movement were aware of the two line struggle in the International Communist Movement and were consciously rejecting the ‘peaceful coexistence’ advocated by Moscow and were adopting an anti-revisionist position’. It is clear from this action that Costello and his supporters were looking to Chairman Mao and the CPC as the leaders of the word revolution. This is further supported by events following the establishment of the IRSM in 1974 when Costello deride the ‘stickies’ for being counter revolutionary, revisionist and pro-Moscow… evidence of the inspiration from Maoism can also be seen from he first name chosen by Costello for the new revolutionary army established in 1974 to continue to wage revolutionary armed struggle. The Army was called the People’s Liberation Army and later became the Irish National Liberation Army.’

The piece also suggests that those around Jim Lynagh, Séamus McElwaine and Patrick Kelly in PIRA comprised a ‘Maoist Republican Cadre’ which ’caused considerable fear both within the Provisional Leadership, the Colonial office in the Six Counties and particularly with the corridors of power in Whitehall and Westminster.’

In 2017, a generation after the systematic assassination of the Maoist Revolutionary IRA leaders in the border region and the compromise of. the reformist Belfast leadership of the Provisional Movement, Irish Socialist Republicans (ISR) was established as a revolutionary organisation upholding Marxism-Leninism-Maoism as a third and higher stage of Marxism and the shining path to Revolution in Ireland.

Irish Socialist Republicans (ISR) is a Maoist organisation formed in 2017.…

An Ghrian Dhearg (The Red Sun) is published by the Maoist group Irish Socialist Republicans (ISR). It carries the subtitle: “Voice of MLM [Marxism-Leninism-Maoism] Ireland”.…

See An Ghrian Dhearg in the archive