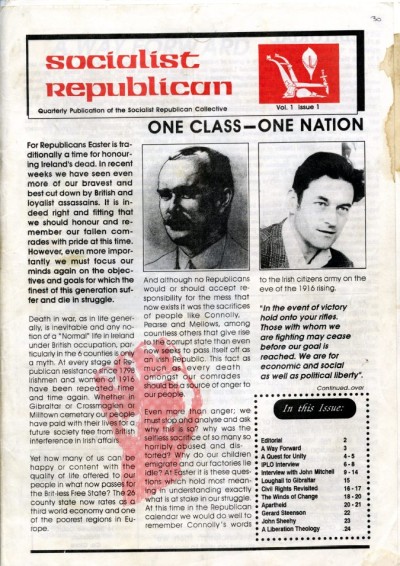 This rare document is a very welcome addition to the Archive and many thanks to Roasted Snow for forwarding it.

The pamphlet was issued by the Socialist Republican Collective, which was formed by Jimmy Brown and effectively the political representations of the Irish Peoples Liberation Organisation (IPLO). The IPLO came into being in 1986 in the aftermath of convulsions within the Irish National Liberation Army (INLA) and its associated political party the IRSP. The events that led to the split from the INLA included the super grass trials which led to the imprisonment of a layer of members of that organisation, although the convictions were later overturned.

The IPLO was primarily constituted by those who had left or been expelled form the INLA during the previous number of years. Initially it attacked the INLA and IRSP in a bid to supplant them, but after a cycle of retaliatory violence the INLA though seriously damaged remained in existence. Regarded as being heavily involved in the drugs trade and other forms of criminality, in 1990 a feud broke out amongst the IPLO membership with two factions emerging, one termed the ‘Army Council’ led by Jimmy Brown and another termed the ‘Belfast Brigade’. Brown was murdered during this feud and although the two factions survived later in October 1992 PIRA effectively wiped out the organisation.

This document, however, predates many of those events and interestingly does not appear to foreshadow them. It is well produced and has a broad range of content, from articles on Liberation Theology, Loughall, Gibraltar, Apartheid, a consideration of the Civil Rights period and an appreciation of both Gerard Steenson and John Sheehy. It also contains an interview with a representative of the IPLO.

The political orientation is clearly positioned within the Socialist Republicanism of its predecessor. Indeed the front cover has images of both Connolly and Seamus Costello and an accompanying article written by Jimmy Brown referencing both.

The Socialist Republican is published by a group of political activists engaged in the struggle for National Liberation and Socialism in Ireland. Organised nationally we represent a geographical spread covering most of the country. The aims and objectives of our group and our paper are the establishment of a 32 county Socialist Republic based on the principles of Scientific Socialism as interpreted in the Irish context by James Connolly and his followers.

Believing that only the Irish working class can and will liberate the country in the process of its own emancipation the Socialist Republican stands for the creation of a Broad Front and the simultaneous creation of a revolutionary vanguard within such a front. In this way we can maximise the forces mobilised in the struggle while ensuring that its political leadership and direction are not subverted by reactionary or populist elements in the existing parties.

The Broad Front concept is expanded upon further in the text in an article on page 3 which asserts that:

For us as Socialist Republicans the concept of a Broad Front leading directly to the creation of a new Republican Congress represents the most credible and likely basis upon which to forge “THAT PREFECT AGREEMENT”. Such a Broad Frotn to be brought into existence through a series of organising conferences, would enable debate and clarity on issues to be reached in advance of the inauguration of the Congress itself. Which once established would in Frank Ryan’s own words “be in effect the parliament of the PLAIN PEOPLE and would plan their campaign and direct it to towards the goal of a workers republic’. Without this attempt to synthesise the struggles of the various sections of the anti-imperialist movement the working class have no real prospect of revolutionary leadership. As Marx was clear to point out the working class under the pervasive influence of capitalism will only develop a limited or “Trade Union Consciousness”.

It notes too that:

As surely as we raise the issues of a Broad Front; Republican Congress and a Vanguard our detractors and the faint-hearted will cry: But who should join such a Front (and who should be excluded)? The short answer to this question is simple: All who accepts its agreed minimum programme.

The interview with an IPLO representative is of equal interest, but perhaps a flavour of it can be given by the first question.

S.R. Little is known about your organisation, other than what we read in the established media. Can you tell us what your organisation stands for and why it was formed. IPLO In its origins as a distinct organisation the IPLO shared the experience of various people involved in struggle around the world. A number of comrades who have been active in our struggle for many years pinpointed drift and decay in what posed as the Republican Socialist tradition. At the same time recognising some progressive developments within the Republican Socialist Movement. Upon considering both these factors these comrades concluded that they fell short of what is needed in over to achieve Connolly’s Reconquest of Ireland. The IPLO was founded upon this principle and so stands for the emancipation of the Irish Working Class, and the liberation of Ireland form the yoke of Imperialism. We were formed to contribute - in all areas of struggle - to this objective. Because, in our considered analysis, no other single organisation accpets the primacy of the working class as the agency of liberation AND the centrality of the National Question we had no option to but to re-enter the political arena as a separate force.

Roasted Snow suggests that only one issue of this was produced, but any other literature from the SRC/IPLO would be very welcome.

Formed in 1986, the Socialist Republican Collective was effectively the political representation of the Irish Peoples Liberation Organisation (IPLO). The IPLO came into being in the aftermath of convulsions within the Irish National Liberation Army (INLA) and its associated political party the IRSP…

See Socialist Republican in the archive