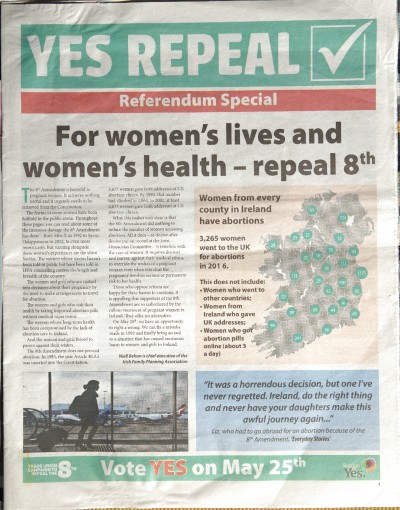 Many thanks to Alan Kinsella of Irish Election Literature  for this document.

This is a particularly important publication, issued by the Trade Union Campaign to Repeal the 8th Amendment just prior to the referendum on May 25th 2018 when the 8th Amendment was repealed to allow for the provision of abortion in the Republic.

The Trade Union Campaign was part of Together For Yes, and brought together Connect, Mandate, the Communication Workers Union, United, Together for Yes, TUC, SIPTU, Congress and Dublin Council of Trade Unions.

A wide range of contributors are included such as Clare Daly TD, Rita Harrold of ROSA, Louise O’Reilly TD, Brid Smith TD, activists such as Deirdre Duffy, Orla O’Connor and Ailbhe Smyth, and union representatives such as Taryn Trainor and groups, academics, medical experts and others campaigning in the area.

A concluding piece by Dr. Fiona Bloomer of Ulster University and author of Abortion as a Trade Union issue notes:

A ground breaking study funded by Unite the Union, Unison, Mandate Trade Union, the CWU Ireland and the GMB set out to explore if abortion was indeed a workplace issue.

Over 3000 trade union members took part in the study which was carried out by a team of researchers at Ulster University. Participants indicated broad support for legal reform, with 80% supporting the view that women’s health should be the priority in any legal reform. The vast majority; 87%, believed that a woman who had an abortion should not be criminalised.

Of those surveyed 20% had direct experience of abortion as a workplace issue. This included cases such as women unable to get time off due to precarious employment, stigma in the workplace, and a lack of support from employers.

An online discussion forum that formed part of the study allowed participants to discuss their views and share their experiences. Hostile views on abortion were expressed by some participants, however after engaging with those with direct experience changes were evident.

The study, the first of its kind in the world, provides clear evidence that unions can play a pivotal role in campaigning for reform and can lead the way in supporting those directly affected.

The Trade Union Campaign to Repeal the Eighth Amendment was established to campaign for the repeal of the “right to life” eighth amendment in the 2018 referendum.…