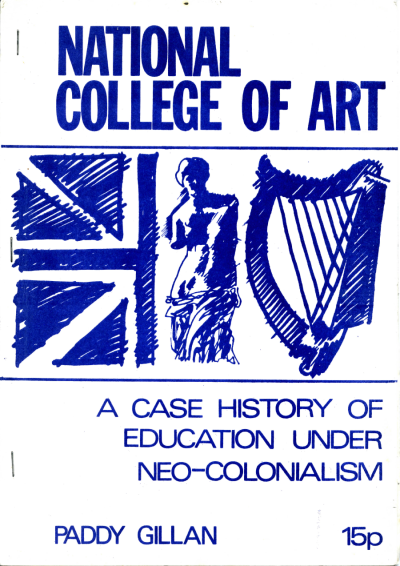 This document was published by the Student Union of the National College of Art in Dublin (later the NCAD), and written by Paddy Gillan. The dedication is suggestive of its political provenance:

To Cathal Goulding, house-painter, who spoke at a student seminar in November 1970; trusting that he and his fellow tradesmen will find it of value to apprentices.

As the acknowledgements explain, the ‘pamphlet is, primarily, the result of a seminar - “Art and Society” which was held in the NCA in November, 1970’. It notes that ‘The theoretical guidance of speakers at the seminar - in particular, Jack Dowling, Lelia Doolan, Seamus O Tuathail and Eoghan Harris - helped enormously in my attempt to analyse the NCA situation’

‘For advice and help in writing this pamphlet, I am indebted to Nell McCafferty, Anne Harris and John Armstrong’.

It is broken up into five chapters or sections and attempts to give an overview of the NCA and its then situation. At that time the College was situated as part of the Leinster House complex between ‘Dáil Éireann and the National Library in what were once the stables of Leinster House’. The Overview notes that at the time 120 students were in attendance in the institution, ‘eighteen class-rooms existed in the College, many of which are closed, necessary equipment is scarce. Rules and regulations governing the use of such equipment as exists result in it lying idle more often than it is in use. Maintenance of the NCA is in the hands of the Board of Works. The building is patrolled each night by a military picquet; the attitudes to academic discipline reflect this’.

The Background suggests that from its inception to the 1920s:

The school [Metropolitan School of Art - as was] was a colonialist institution. The work conducted in [it] was a mixture of Graeco-Roman and English art-decorative traditions. This was actualised in the form of individual art-objects - drawings, paintings, sculptures - and multiple craft objects which were for private consumption. The actualisation took place in a British colony, the people were politically, economically, culturally and educationally oppressed. The staff and students of the school were, essentially, privileged and their function was to serve the cultural needs of the beneficiaries of colonialism in Ireland - the British, Anglo-Irish and upper-middle class sections of the community. As it served an elite minority, the school was neither a proper cultural or educational establishment because proper culture and education must serve and relate to the whole of a community; furthermore, it was almost totally isolated from the community. Elitism and isolation continue to affect the NCA.

..concentrated purely on social affairs. Apart from meeting at social functions, NCA students were effectively disunited and disorganised within the College… student general meetings were rarely held; when they were, it was to discuss the Annual Art Ball.

But the account of developments in the 1967 to 1971 period gives - perhaps - an echo of events occurring further afield, not least in the form of student boycotting of classes due to conditions in the NCA in relation to lack of staff and resources culminating in a ‘work-in’ in February 1969 (there’s an entertaining reference to Brian Lenihan, then Minister of Education, being forced ‘to leave a meeting at TCD through a toilet window after repeatedly refusing to state why he had closed the NCA [on foot of student actions]’. In April there was an occupation of the NCA and the following year there was another occupation and by January 1971 NCA students were picketing the Department of Education on a daily basis and further occupations ensued. The final section, Beyond History addresses further the issue of neo-colonialism and the position of the NCA within that context. The pamphlet also gives a sense of the times and the attitude to cultural areas within the state. There’s one telling quote from Terry Kelleher in Hibernia from 1970:

The crux of the matter is that the NCA is not economically productive in the way that a school of engineering or college of technology can be. Neither is the College a vote-catching issue.

The National College of Art and Design Students Union was formed in the late 1960s when it replaced the NCA Students Representative Council.…

See National College of Art Students Union in the archive