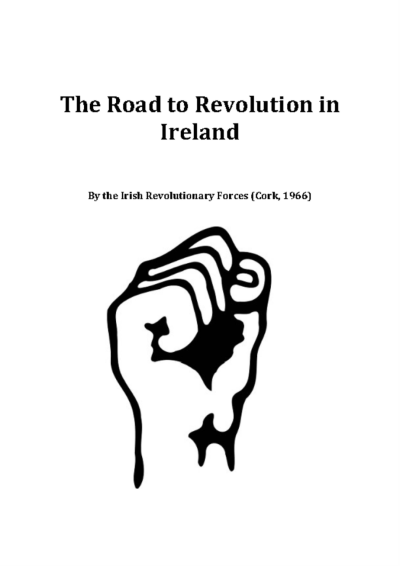 Many thanks to Jim Lane for the following document. He has appended a postscript, please see below.

This document first appeared in serial form in 1966 AP and was reprinted as a booklet/pamphlet in the early 1980. The Irish Revolutionary Forces was a group of former IRA members and activists in the Cork area who sought a more leftward and activist approach by the IRA. Some of the activities of the IRF are detailed on this wiki page.

The IRF later became Saor Éire (the Cork based group, not the Dublin based one) and were responsible for People’s Voice (see here in the Left Archive).

This document, the Road to Revolution in Ireland, outlines in some detail the approach of the IRF to the issues facing the left and Republicans in the Ireland of the 1960s. This is dealt with sections under specific headings including: Revolution, Revolutionary Programme, Revolutionary Policy, Power Policy, Reconstruction Policy and Revolutionary Action. Each sections outlines aspects of the problems being faced.

For example, in the first section on Revolution, it is noted that:

…it is obvious that the Irish Revolution must be a two-phased effort. The first, must be aimed primarily at the overthrow of the Partitionist regime, and the seizure of state power by the revolutionary movement. The second, must represent a co-ordinated national effort during which the national community, under the leadership of the revolutionary movement, will undertake the reconstruction of the nation on completely new lines.

And it emphasises that the revolution cannot halt at the completion of the first phase.

In relation to the Revolutionary Programme it argues that:

A truly revolutionary programme for Ireland must, of necessity, be diametrically opposed to the existing order of things, this is only logical; and since Ireland now functions according to the dictates of capitalism, then, it is but common sense to suggest that an Irish revolutionary movement must found it’s programme on the principles of Revolutionary Socialism. There exists no other known alternative.

…[such programmes] illustrate a great weakness among contemporary Irish Revolutionaries; that is, the tendency to confuse policies for a programme, and therefore to confuse principles with strategic and tactical expediencies. An Irish revolutionary programme must be based on the destruction of the neo-colonial system, and the construction of a new socialist order.

Interestingly the document argues that ‘the use of force’ and participation in ‘the arena of parliamentary politics’ are ‘purely a matter of policy’.

When discussing Power Policy, the point is made that:

Of necessity, a revolutionary movement, must, from the outset regulate it’s policies on the premise that force will have to be used in the struggle for power. Both precedent and ordinary common sense points to the realism of this stand.

Policies governing the country’s reconstruction, along lines compatible to the principles of Socialism, are of tremendous importance. Indeed, there are many cases where the revolutionary forces experienced success on the battle fired, only to lose their way when it came to the implementation of the social, political and economic changes that justified their existence in the first place.

The great need is to demonstrate over and over, that this business of revolution cannot be reduced to such relatively simple terms, a learning how to use a gun, and then taking off to take a shot at a target e.g., U.D.R., or the likes; Revolution represents political action under the most demanding of conditions; it is a haven neither for fools, rogues or adventurers.

Finally in a consideration of Revolutionary Action it points to the 1956 campaign as an example of one in which there ‘existed no programme that we know of… consequently it is difficult to determine what the I.R.A. Was actually fighting to establish as an alternative to what it was trying to destroy’. And by contrast it argues that ‘the I.R.A. Leadership of 1933 issued one of the very few revolutionary programmes that has ever emanated from an Irish revolutionary movement’.

All told a very useful document from an organisation of great interest.

When offering us this document for insertion in the Archive, Jim Lane stated:

"I would be delighted if the contents of this document, were to be read and studied, by those who today are generally refereed to as 'dissidents'. It presents them with a check-list document , to help them to evaluate where they stand when compared to the positions required by the The Road to Revolution in Ireland today. As I see the situation today, they will inevitably be drawn to the conclusion that those who took time out, in the early 60's to analyse where they were going, had done the correct thing. For them the obvious advise in this document, calls out to the 'dissidents' to call a halt to their military campaign. I am and always have been aware, that many republicans always confuse mention of politics with parliamentry politics and usually believe that that is where they are being led, when urged to put down the bomb and gun. There are many other ways to advance their cause outside of parliament, if that happens to be their main objection. Many ways to highlight what they want for today's Ireland. Hopefully, they will take some advise from the Irish Revolutionary Forces of the 1960's and Read and Study" 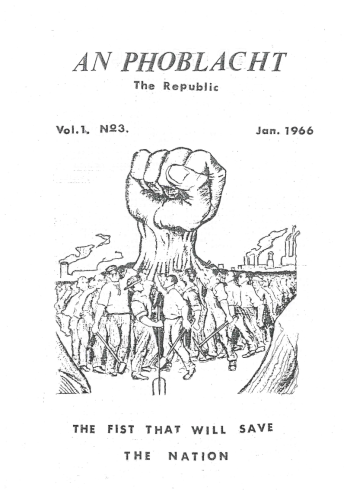 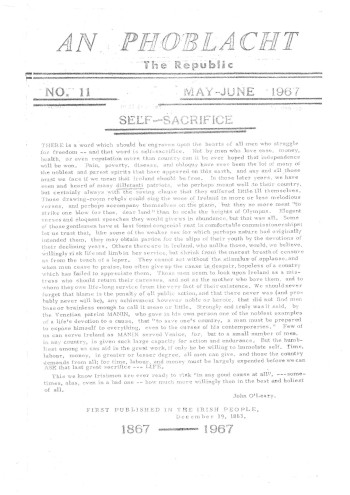 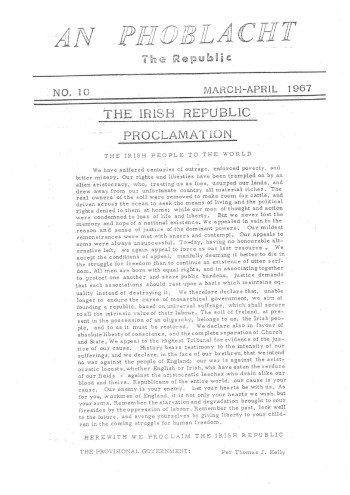 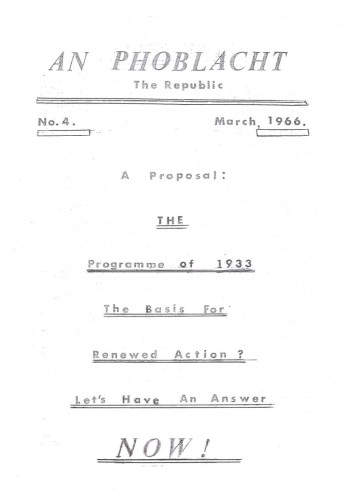 Irish Revolutionary Forces in the archive

Brian Hanley: The Lost Revolution - The Story of the Official IRA and the Workers' Party