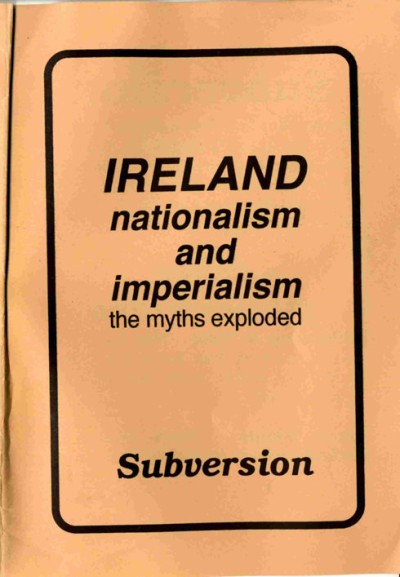 Here is an interesting document, the text of which can be found on the internet here  (as always the Archive is interested in not just the text of documents but the way in which they were produced in order to give some sense of the groups, formations, parties or individuals who produced them).

It was produced by the Manchester group Subversion . This group had drawn some members of another pre-existing group called ‘Wildcat’ and was strongly influenced by libertarian and council communism, was centred on Manchester. Formed, as best as can be established, c. 1988 it disbanded in 1998. As this document issued on its dissolution notes, Subversion sought ‘a new organisation that could carry on the work of developing communist ideas and politics free from the need to label ourselves as either dogmatically marxist or anarchist’. It appears to have issued a prodigious amount of material. Eventually most former members joined the Anarchist Federation.

The stated aims of Subversion, printed on the back of the pamphlet included the following:

We are against all forms of capitalism: private, state and self-managed. We are for communism, which is a classless society in which all goods are distributed according to needs and desires. We are actively opposed to all ideologies which divide the working class, such as religion, sexism and racism.

And in the context of this document the following is included:

We are against all expressions of nationalism, including ‘national liberation’ movements such as the IRA.

This document, a twenty page pamphlet, engages with the issue of Ireland. From internal references appears to date from no earlier than February 1992. Given that this predated the first cessation and later political developments it provides a useful insight into the view of some on the anarchist left to the conflict on the island. Organised into discrete subsections under various headings including “Troops Out”, “The Policies of Sinn Féin”, “The Myth of National Self-Determination”, from the start the pamphlet takes a very clear line:

As the bloodshed continues, year after year, with no end in prospect, it’s not surprising that opinion polls carried out in mainland Britain over the past 20 years have consistently shown that between 50-60% in favour of a British military withdrawal from Northern Ireland. The reasons why such a view is expressed are no doubt diverse. Britain’s Ireland Problem, or as some prefer, Ireland’s British Problem, has a complex history stretching back for hundreds of years. Few people really understand 'the Irish Question' and most have no answer to it except to wash their hands of the whole sordid mess. If the Irish want to shoot and bomb the hell out of each other, they say, why should we stand in their way - just get 'our lads' out of there and let them get on with it. The best that can be said about such people is that at least they are not organised into political groups claiming to represent the interests of the international working class .... Which is more than can be said for a different element within the 50-60% who want Britain to get out of Ireland, and whose ideas we mainly want to challenge in this pamphlet.

We are referring of course to the members and sympathisers of the left-wing groups who support 'self-determination for the Irish people', and who would regard withdrawal from the 'Six Counties' as a victory for the Irish people over British Imperialism. Since 'Irish self-determination' is these groups’ goal, they naturally push the idea that it’s not for 'us Brits' to tell the Irish people how to conduct their own national liberation struggle. If you oppose the British state and what it’s doing in Northern Ireland, you must automatically give 'unconditional support for republican resistance to sectarian attacks and British terror' ( so say the Anarchist Workers Group).

In this way the left present a mirror image of one of their own accusations against the British state; while they complain that 'any challenge to Britain's role in Ireland is interpreted as support for the IRA and therefore subversive', they themselves tend to see any criticism of the IRA as justifying the actions of the British state and, therefore, as apologising for imperialism. The way we see it, however, these 'options' - to oppose the British state and support the IRA, or to oppose the IRA and support the British state - are both wholly contained within the bounds of capitalist politics. Instead of looking at the entire range of political and military groupings critically and arguing that the interests of the working class lie beyond and against this whole spectrum, they encourage the working class to line up behind one capitalist faction or another. This is one of the prime functions of the left, which it performs as usefully (for capitalism) in relation to Northern Ireland as it does with regard to many other issues.

Interestingly it puts forward a line that is supportive of certain defensive actions:

Although our argument is that the Republican struggle is not in itself a struggle for working class interests, there are certain things mixed up with it that we would support. Like, for example, the 'Free Derry' 'uprising' of August 1969, when the Catholic Bogsiders organised themselves to repel attacks by Protestant marchers and the police with stones, petrol bombs and burning barricades.

And positions this within the context of class:

We support such riots [which it argues are analogous to ‘Toxteth , Brixton or Tottenham’] not because we think they are somehow inherently revolutionary, but for the basic reason that they show a spirit of rebellion alive within the working class and an unwillingness to put up with attacks on its conditions of living. A class which doesn’t fight back against the hardships which are imposed on it is unlikely to ever rise up and overthrow its oppressors.

Its outline of the split between Provisional and Official republicanism is also worth noting:

Although in recent years Sinn Fein and the IRA have fought a twin-pronged campaign 'with the ballot paper in on hand and an Armalite in the other', the Provisional IRA initially came together as a purely military organisation. Unlike the Official IRA, from which they had split during 1969-70, the Provos had no interest whatsoever in the sort of reforms demanded by the Civil Rights movement, since the Provos’ aim was not to modify the Northern Ireland state ate but to get rid of it. At first even the Stalinists of the Official IRA were denounced as too left-wing by the Provos - though when the Provisionals came to write their own programme after the split (published as Eire Nua in 1972), they actually based it on an old document that the Stalinist Coughlan...

Indeed the analysis of the Provisional IRA and Sinn Féin is extremely hostile, with the pamphlet arguing that “both the IRA’s present actions and the goals it is fighting for mark it out in our eyes as an anti-working class organisation, speculation about what a united Ireland governed by Sinn Fein would be like is largely academic - because it’s highly unlikely to come about. Although high-ranking British military officers have admitted on many occasions that they are never likely to be able to wipe out the IRA completely, the British state can still just about manage to sustain the political, social and economic costs of containing the impact of the 'Troubles' at a tolerable level”.

Also notable is the analysis of various formations including Troops Out, the RCP, the SWP and other groups and parties on the British left during the period. Also in the text is mention of the Workers Solidarity Movement.

Subversion was a libertarian and council communist group based in Manchester in the UK. It originated in a previously existing group called Wildcat, which ultimately had its roots in Solidarity. Subsequently most members joined the Anarchist Federation.…

See Subversion in the archive