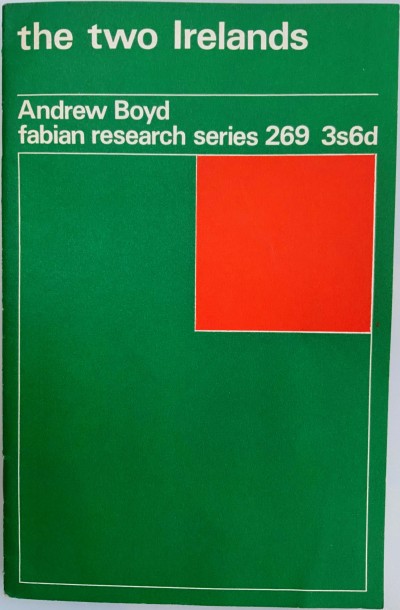 The Fabian Society is a British socialist organisation whose purpose is to advance the principles of socialism via gradualist and reformist, rather than revolutionary, means.[1][2] It is best known for its initial ground-breaking work beginning late in the 19th century and continuing up to World War I. The society laid many of the foundations of the Labour Party and subsequently affected the policies of states emerging from the decolonisation of the British Empire, especially India. Today, the society functions primarily as a think tank and is one of 15 socialist societies affiliated with the Labour Party.

This document by Andrew Boyd is a Fabian Research Series pamphlet and was published in May 1968. It offers a fascinating insight into views of Ireland from Britain during this period.

In the first chapter it is argued:

It is virtually impossible to write about politics in Ireland without mentioning the extremists-the IRA and Sinn Féin on the one hand, Paisleyism and Ulster Protestantism on the other.

It is not clear what politician originally conceived the idea of partitioning Ireland so as to separate the north-east, where two-thirds of the people are Protestants, from the predominantly Catholic popula­tion of the remaining counties. A form of partition was suggested as early as the 1840s when Daniel O’Connell campaigned for repeal of the Act of Union. Partition was mentioned again when Gladstone made up his mind that Ireland should have home rule.

Yet it was never a solution that appealed strongly to Irishmen, either Unionists or Nationalists. This probably explains the duplicity of certain British politicians when they finally decided during the last Home Rule crisis at the beginning of the present century, that partition was the only the answer to the Irish question.

A United Ireland would, however, be so vastly different from either of the two states that exist in the country today that many of the politicians now in power might not survive long in public life.

Just as the Irish Parliamentary party as swept into oblivion with the rise of Sinn Fein in 1918 so it is conceivable that those political parties which have dominated their separate parts in Ireland since 1920 might be completely be eclipsed in the new Ireland. From this viewpomt Mr Lemass’s plan for a united Ireland with two parlia­ments is understandable. It is his compro­mise between national idealism and the need to protect the interests of the power groups in both parts of the country.

There’s much of interest, not least a discussion on discrimination in employment in the North. And this reference to Sinn Féin is intriguing given one of the issues that would convulse that organisation only a year or so later:

In recent years the more militant republicans have revived the old name Sinn Féin but despite the opportunities offered by proportional representation this party has been unable to gain even a foothold in Dáil Éireann. 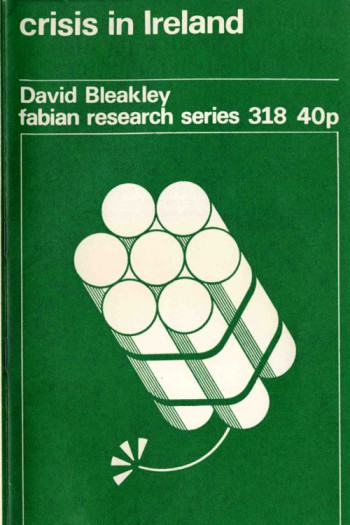 Fabian Society in the archive

The Fabian Society is a British socialist organisation whose purpose is to advance the principles of socialism via gradualist and reformist, rather than revolutionary, means.[1][2] It is best known for its initial ground-breaking work beginning late in the 19th century and continuing up to World War…

See Fabian Society in the archive