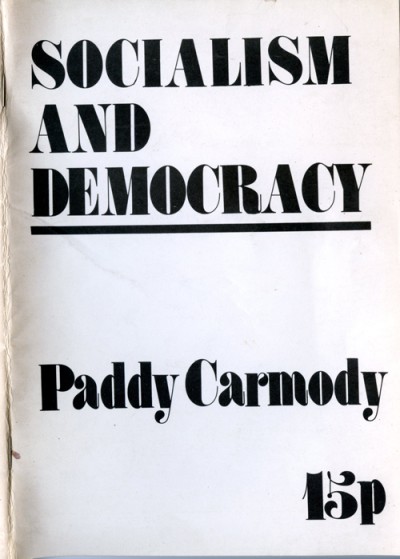 This document was issued by the Irish Marxist Society. The IMS - which split from the Communist Party of Ireland in 1976, was eurocommunist in orientation, strongly pro-feminist and antagonistic to the two nations theory. Its members ultimately joined the Labour Party. Obviously any further information on the IMS would be very gratefully received by the Archive.

This document is 12 pages long, A5 in format and consists of an essay on the issues of Socialism and Democracy. In the Introduction it notes that:

The confusion on the question of freedom and democracy largely arise because the societies in which socialist revolutions have won have been semi-feudal and the carry overs from pre-Revolutionary societies have become identified with Socialism. Lenin and the leadership of the 1917 revolution tried to transcend the limitations of the society in which they operated. Marx had pointed had made his own history, not in circumstances chosen by himself [sic].

It takes a strongly anti-Stalinist line;

Stalin, instead of fighting against the authoritarian legacy of Tsarism, used it to crush all opposition. The ambiguous attitude of the Communist movement, up to recently, to the question of freedom stems from this period. The varieties of distortions of Marxism which are at present operating on the left in ireland, whether Stalinist, Trotskyist or Maoist, all have in common a complete divorcement from Irish society and Irish history.

This explains their weakness in the face of the general attack from the right. Its difficult effectively to defend civil liberties when the alternative society you propose would deny them also.

Interestingly it is strongly supportive of the United Irishmen.

The United Irishmen were a profoundly democratic movement. James Connolly in his ‘Labour in Irish History’ drew attention to the almost socialistic ideas which some of its leaders expressed. In the crucial of a double oppression the hammer of the future was forged.

Under various headings, ‘Stalinism’, ‘Connolly’, ‘Democracy in Ireland’ and ‘Democracy and the North’ aspects of socialism and democracy are teased out. In the latter it is supportive of the S.D.L.P. ‘its present policy, no matter what disagreements socialists might have with the views of some of its leaders, is the only feasible policy if sectarianism in NI is to be defeated’. It is harshly critical of P.D. And ‘the various forms of Trotksyite organisations… [from whom] comes the cry that a socialist must never compromise with anybody’. And it says that ‘the fact that Unionism keeps splitting and yet is still able to maintain its hold over the majority in the North has been contributed to by the exclusivist policies of the left including Official Sinn Féin’.

Interestingly it argues that ‘united movements do not have to be continually thinking of the time when they will break up… this conception has been particularly well developed in both theory and practice by the Italian Communist Party and by the Socialist-Communist alliance in France. Their conception is of buiidling a socialism in which all sections of the population, apart from the monopolies, would participate. This perspective is based on the fact that the advanced capitalist countries have already been through a capitalist and democratic revolution and that circumstances are vastly different from those prevailing in the feudal countries in which socialist revolutions have taken place’.

And it appears to seek cooperation with a very wide variety of forces.

In Ireland it is not just a question of cooperation with avowed socialists. The FF party, in its rank and file contains many of those who would be in Labour, Socialist or Communist Parties in Europe. There are also progressive forces within Fine Gael.

Carmody had an interesting political career. As a note at the end of the leaflet says, he was Secretary of the Rathfarnham Branch of the Labour Party from 1946-1948. He then was a founder member of the Irish Workers’ League and a member of its successor the IWP. A member of the National Executive of the Communist Party of Irealnd and former editor of the Irish Socialist from 1961 to 1975. He wrote under the name A. Raferty a range of documents, including ‘Socialism and Social Ethics’, ‘The Fenians’ and ‘The Exploited Island’.

The Irish Marxist Society – which split from the Communist Party of Ireland in 1976, was eurocommunist in orientation, strongly pro-feminist and antagonistic to the two nations theory. Its members ultimately joined the Labour Party.…