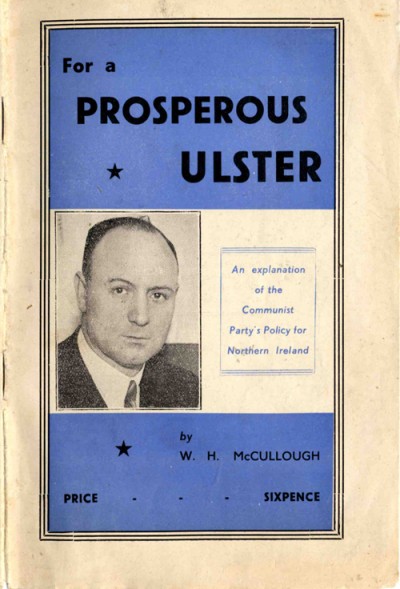 This document is perhaps the oldest one in the Archive, dating back to the Second World War period. It was issued by the Communist Party of Northern Ireland. The CPNI  emerged from the suspension of the Communist Party of Ireland in 1941 (an event which ultimately led to the eventual emergence of two CP formations on the island, the Irish Workers Party in the South in 1948 and the CPNI in the North). This state of affairs was not to be altered until the merger of the two parties as the CPOI in 1970.

The document itself is slightly smaller than A5 and sixteen pages long, it was written with the end of the war in sight. Therefore it notes that ‘Future prospects are bright. Victory is in sight but it is not yet won’.

And it notes that:

Stalin’s wise declaration that a wounded beast can be very dangerous is a timely reminder that all is not over; the beast has to be followed into its lair and destroyed. After Germany Japan will have to be dealt with. The people have learned innumerable lessons from the war. They have been inspired by the glorious achievements of the mighty Socialist Power, the Soviet Union. They have seen that when united internally and with the peoples of countries inspired by the same ideals of freedom and democracy against a common enemy and for a common cause, the dark forces of fascism can be conquered.

The value of the cooperative effort has manifested itself to millions as a new power in society, even though at times co-operative effort was restricted and limited by a section of reactionary employers.

It further notes that:

In Northern Ireland also there will be great work of reconstruction. Bombed areas must be rebuilt. Houses will have to be constructed on modern lines, providing the greatest possible opportunities for the people living in them to lead a healthy life.

In relation to the North it continues:

The greatest obstacle to the unity of the people and the full mobilisation of the resources of NI is the Unionist Party. The Government has made no effort to unite the people, and the war effort of the Province left much tone desired. The anger of the people eventually drove Andrews and his gang out of office, a new Unionist Party Government was formed under the leadership of Sir Basil Brooke and pledged to conduct a policy for the utmost prosecution of the war.

There is some interesting material on the ‘Imperial Contribution’, the funding given to NI by the British Treasury. There is also a strong focus on industrialisation and on the prospects for industrial growth in relation to shipbuilding, engineering, aircraft and linen. It argues in relation to these and other areas that ‘it is obvious that a considerable amount of capital expenditure will be required and complete re-organisation must take place’.

It also argues for Social Insurance, modelled on the Beveridge Plan, Health Services and Education. In relation to the last it proposes that ‘dual control be abolished; religious instruction to be at the option of the parents, and teachers have the right to teach religion or not, according to their wishes and conscience’. It is reasonable to suggest that overall the leaflet does not directly address the issue of national identity as such in any detail. It does reference the demand that:

In fighting for this programme for the people, labour must ensure that the people obtain every opportunity to exercise their democratic rights. Labour must ensure that at the earliest opportunity undemocratic legislation, such as the Special Powers Act, is removed from the statute book; that undemocratic actions such as the gerrymandering of constituencies and sectarian discrimination against a section of the people is ended.

The labour movement must demand that all those elected to represent the people carry out their responsibilities. There must be an end to Parliamentary absenteeism and the virtual disenfranchisement of many electors through the abstentionist policy of a section of Nationalist members of Parliament.

But in terms of the island as a whole it seeks ‘a Government that will be a good neighbour of the Government of Southern Ireland’.

Overall an useful guide to the orientation of the Communist Party in Northern Ireland during this period. 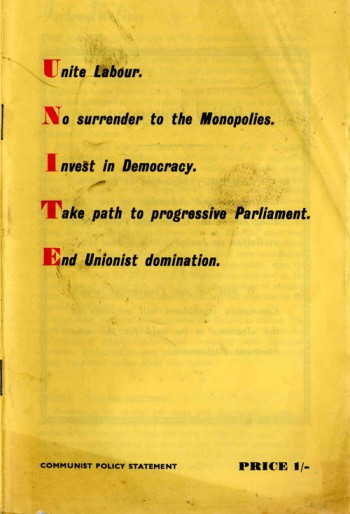 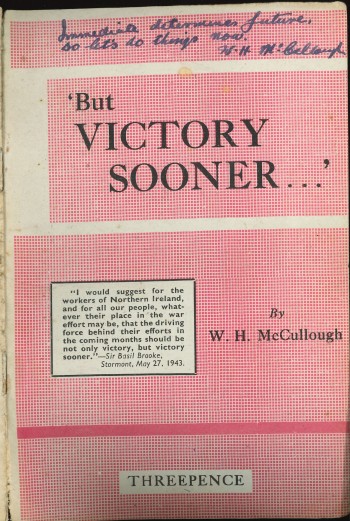