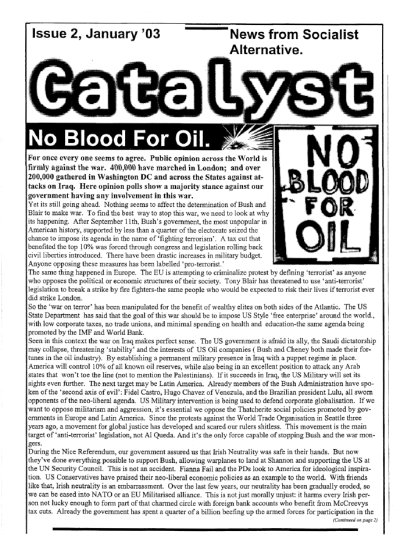 For this donation to the Archive many thanks to Alan Mac Simoin [and good to mention again too the excellent WSM Archive taking shape here  which has significant volume of Irish anarchist related materials].

Here’s an interesting document from Socialist Alternative [a name also used at times elsewhere including the UK by the CWI], a group that had been part of the SWP previously. It is an intriguing blend of anarchism, direct action and Leninist thinking. Note the listing under ‘Events and Demos’ of the Anarchist Federation Conference in Belfast which notes ‘talks will be held on topics such as autonomist Marxism and council communism’.

And in the text, and in particular on the issue of squatting the document notes ‘One of the problems for those trying to organise campaigns outside of the ‘twin towers’ of the Socialist Party and Socialist Workers Party, will be aware that one fo the difficulties faced is a lack of resources and facilities to kick-start. The creation of such an autonomous zone in Dublin would greatly facilitate the development of campaigns, providing education resources for the activist community and general public and a centre for organisation.’

The contents is fairly varied, albeit the political orientation is not clearly described. There are pieces on Carrickmines Castle, sport for direct action at Shannon - where a large protest had been held in January of 2003, and descriptions of various marches against the Iraq War world wide. This draws connections between ‘cutbacks at home [in Ireland] and violence abroad’.

Any further information on the development of this formation would be very welcome.

Socialist Alternative was a small group formed by ex-members of the Socialist Workers Party. Members went on to join both the Workers Solidarity Movement and the Irish Socialist Network.…

See Socialist Alternative in the archive

See Catalyst [SA] in the archive