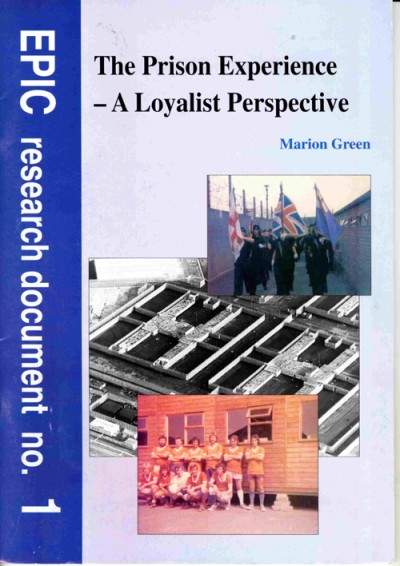 “This document [and many thanks to the person who donated it] may seem at first sight an unlikely one to be part of the Left Archive, however it provides both an overview of the general conditions and history of the prison system in Northern Ireland for political prisoners - Loyalist and Republican, and also gives an insight into the relationships between both as well as a developing political consciousness on the part of the former.

The Preface notes that EPIC ‘as a community based self-help organisation welcome [new arena’s for addressing differences and representing communities] and will continue to give our support to these latest developments at the political level, we are also conscious of the impact and legacy of violent conflict at community level’. And…

EPIC has taken responsibility to assist in the reintegration and transformation of ex-prisoners who engaged in the violent conflict. As an integral part of this work EPIC has undertaken intensive research into prison-related issues - whether describing the background to the prison experience itself, or cataloguing the many predicaments, problems and concerns which politically- motivated ex-prisoners encounter upon release.

The Introduction further notes that:

For the past thirty years there have been thousands of Loyalists incarcerated in NI’s prisons and yet very little has been written about the subject. That neglect is all the more noticeable when one considers the number of books and other publications which have appeared dealing with Republican prisoners.

And most importantly given the left orientation of some Loyalist originating political parties:

Just as remarkable has been the crucial impact former prisoners and their associates have made upon the political process - a process once kept remove from working class aspirations and interventions. Within the Loyalist working-class community parties such as the Progressive Unionist Party and the Ulster Democratic Party have done much to help move this entire society away from the politics of intransigence and violence to the politics of accommodation and dialogue, while proving that no surrender of identity or aspiration need be involved in the process.

Inside the document there is a chronological approach, with sections addressing ‘The Early Days: Crumlin Road Jail’ - with interesting anecdotes about how the various paramilitary groupings had to liaise in order to maintain discipline, ‘Internment and Long Kesh’ - and demands for political status where, as is noted, ‘we didn’t get much help from the UUP or the wider unionist population’, ‘Early Prison Protests’, ‘Coping with Life inside’, ‘Fighting Criminalisation’ and so on.

A telling point is made when it is noted that:

Not all the prisoners were interested in politics, some just wanted to get on with their sentences, but a small number of men were interested and they got involved in political debates and discussions, not only with fellow Loyalists but with Official Republicans.

The sense of the prison experience as a crucible for ‘fresh political thinking’, as the document puts it, is strongly reinforced by these observations.”