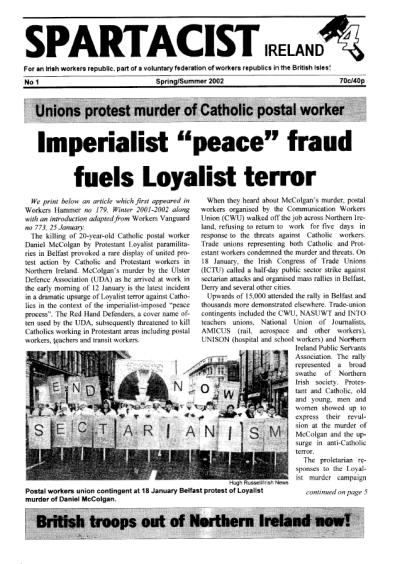 For this donation to the Archive many thanks to Alan Mac Simoin [and good to mention again too the excellent WSM Archive  taking shape here].

One of the smallest, yet particularly well known, presences on the further left are the Spartacists. At marches, protests and other events across the decades they have been ubiquitous. Their roots are of considerable interest too. As noted on this useful wiki overview of their international history  they are the result of a split from the US Socialist Workers Party in the 1960s. During that period and after they remained small and it appears that it was only in the late 1970s and 1980s that they began to see like minded groups develop internationally. With this expansion, at least in geographic terms, came a split which ultimately resulted in the International Bolshevik Tendency. It is difficult to make an assessment of their current size.

Equally usefully the preamble to this document outlines the development of the Spartacists in Ireland and the rationale behind the publication of Spartacist Ireland.

We are proud to announce the publication of the first issue of Spartacist Ireland, newspaper of the Spartacist Group Ireland (SGI) - formerly the Dublin Spartacist Group - Irish section of the International Communist League (Fourth Internationalist). As stated in our international “Declaration of Principles and Some Elements of Program” (Spartacist no 54, Spring 1988), the ICL “Is a proletarian, revolutionary and international tendency which is committed to the task of building Leninist parties as national sections of a democratic-centralist international whose purpose is to lead the working class to victory through socialist revolutions throughout the world”. The establishment of this journal is a modest but real step in the consolidation and construction of an Irish section of the ICL. As VI Lenin explained in Where To Begin (May 1901), the intervention of the revolutionary party is necessary to make the working class conscious of its historic task to overthrow capitalism. Lenin underscored the importance of a newspaper in building such a party.

The banner of the ICL was first planted in Ireland in Autumn 1990 with the founding of the Dublin Spartacist Youth Group (DSYG). Key to the founding of the DSYG was the invention of the ICL into the nascent political revolution which unfolded in the East German deformed workers state in 1989-90. We fought for unconditional military defence of the DDR and for a red Germany of workers councils, for revolutionary reunification through proletarian political revolution in the East and for socialist revolution in the West to overthrow the bourgeoisie. Today we uphold the Trostkyist programme of unconditional military defence of the remaining deformed workers states: China, North Korea, Cuba and Vietnam. We stand for proletarian political revolution to oust the Stalinist bureaucracies whose policies of conciliating imperialism threaten the gains of the social revolutions in these countries - the collectivised economy, central planning and monopoly of foreign trade.

In relation to events closer to Ireland it strongly argues against the Good Friday/Belfast Agreement and proposes that:

During that [Afghanistan] war we raised the demand for class struggle at home and called on the working class to defend Afghanistan. Irish/UN Troops out of the Near East, Balkans and East Timor. Against Labourite chauvinism and Green nationalism the SGI is committed to raising the banner of proletarian internationalism, not least in the context of Norther Ireland. As stated in the ICL’s 1977 ‘Theses on Ireland’ (reprinted in Ireland:workers to power!, 1991) the key components of a revolutionary working-class perspective include: For the immediate and unconditional withdrawal fo the British Army! Full democratic rights for the oppressed Catholic minority in Northern Ireland! Not Orange against Green, but class against class! No forcible reunification! For an Irish workers republic in a voluntary federation of workers republics in the British Isles!

Much of the document is taken up with the Spartacist positions on Ireland and the conflict in Ireland. It notes:

Our comrades [on a visit to Belfast] called for the withdrawal of the British Army; one construction worker replied ‘They should all get out, what we need is a workers army!’ We explained our perspective of programmatically based workers militias to combat Loyalist thuggery and all sectarian terror. We also argued that a just solution will only come about through workers revolution throughout Ireland and Britain.

The 11 September attack on the WTC was a gift to Tony Blair in several ways, not least that the IRA announced on 23 October that they had begun to decommission their weapons. The Britishh government claims to be waging a ‘war against terroris’ in the interests of democracy the ‘civilised world’ against religious fanatics. Terroris anyone? How about the terrorism of the British state, such as the massive bombing of Afghanistan, and before this Serbia, in which this bloodthirsty Labour government took centre stage? … As for religious zealots, there are very few Muslims in NI but British rule there rests on collaboration with a gang of crazed fundamentalist Protestant bigots.

The Catholics are an oppressed minority living under permanent siege. The plight of working-class Catholic families hit international headlines last summer as school-girls in Ardoyne, North Belfast trying to walk to Holy Cross school with their parents were shown daily on television confronting a Loyalist mob howling vile anti-Catholic and anti-woman slurs and throwing pipebombs, bags of excrement and balloons filled with urine. The British Army and RUC - now renamed the Police Service of Northern Ireland - lined the streets and tried to look as if they were making an honest effort to ‘keep the peace’… Catholics know they have as much to fear from the police and army as they do from the Loyalist death squads.

We oppose the perspective of a capitalist ‘united Ireland’ proffered by Sinn Féin nationalists, a prospect which is used to heighten genuine fears among Protestants of a reversal of the terms of oppression. Fear of being incorporated into the clericalist state serves to compact Protestants behind the Loyalist bigots, precluding a polarisation along class lines and instead laying the basis for a communal blood-bat and forced population transfers. The fact that the bourgeois state in the South is a Catholic clericalist state is grist to the mill of the Loyalist bigots. The struggle for separation of church and state and for free abortion on demand is key not only for social progression in the South but as a way to undermine communalism in the North. SF shares the clerical-nationalist outlook of FF.

The rest of the contents are broad ranging, including amongst other pieces an essay on the racist murder of a Chinese student in Beaumont, the issue of abortion [which includes some very harsh critiques of groups as various as the SWP and the WSM], the then situation in Palestine/Israel and an overview of the charging of anti-privatisation protesters in October 2001 entitled: “Irish clericalist state’s “war on terrorism” targets left, workers and all fighters against capitalist oppression”.

The Spartacist Group Ireland, originally established as the Dublin Sparticist Group in Autumn 1990, was an Irish affiliate of the Spartacists / International Communist League.…

Spartacist Ireland was the publication of the Spartacist Group of Ireland, with eight issues produced between 2002 and 2005.…

See Spartacist Ireland in the archive