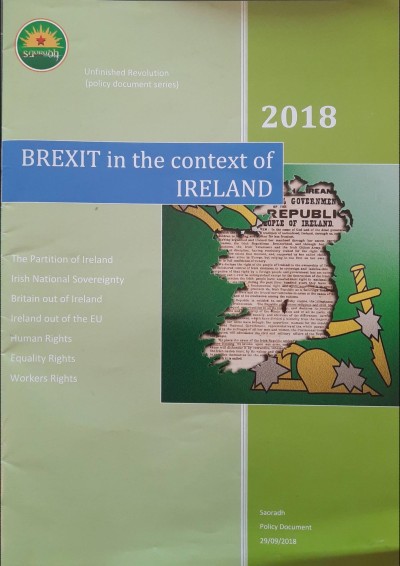 This fourteen page policy document was issued in 2018 by Saoradh. Saoradh as noted on wiki  is:

…is a far-left political party formed by dissident Irish republicans in 2016, which is active in both the Republic of Ireland and Northern Ireland. The party is allegedly close with the New IRA.

Saoradh’s emblem combines the sunburst flag with the socialist red star, a pike, and the three national colours of the Republic of Ireland: green, white and orange.

At its founding it issued the following:

Saoradh believes that Ireland should be governed by the Irish People with the wealth and wealth producing mechanisms in the ownership of the Irish People. This can not happen while British imperialism undemocratically retains control of Irish destinies and partitions our nation, this cannot happen while a neo-colonial elite in a subservient supposed indigenous administration sell’s the nation’s labour and natural resources to international capital.

Saoradh does not believe that British imperialism or capitalist exploitation can be confronted in the structures they have created to consolidate their undemocratic control of the Irish nation. As such we believe any assembly claiming to speak for the Irish People without being elected by the united people of the Irish nation to be illegal. Saoradh will seek to organise and work with the Irish People rather than be consumed and usurped by the structures of Ireland’s enemy’s,

Standing on a long and proud revolutionary Irish Republican history of resistance, inspired by the actions and words of Tone of Connolly, of Mellows, of Costello and of Sands, upholding the founding documents of our forefathers – the 1916 proclamation, the declaration of independence and the democratic programme of the first Dáil, Saoradh hereby declares its commitment to the unfinished revolution, the liberation of Ireland and the social emancipation of the Irish People.

The document itself across its length engages with a range of issues, including Partition, Irish National Sovereignty, Britain out of Ireland, Ireland out of the EU, Human rights after Brexit and Workers Rights after Brexit.

The Introduction argues that:

Brexit has reignited the debate around Irish reunification and raised it to unprecedented levels both nationally and internationally in recent times… A class perspective is a necessary requirement of any policy position based on these Republican principles and Saoradh has attempted to bring such a perspective into being throughtou this document.

We in Saoradh contend that the debate around Irish reunification should not take place devoid of recognition of the ultimate Republican objective of the establishment of an Irish Socialist Republic.

As might be gathered Saoradh ‘is opposed to the usurpation of Irish national sovereignty by the European capitalist and imperialist super-state’ and it lists ‘measures and policies introduced by the EU’ which impact including ‘Privatisation and Austerity programmes forced upon the Irish working class and the working class of other European countries, like for example Spain, Portugal and Greece’; ‘EU confirmation it will enforce a Water Tax’ and ‘Bail out of the Banks at the expense of the Irish people’.

Saoradh also rejects the Good Friday/Belfast Agreement and any mechanisms contained therein including a Border Poll and it argues that the 1918 ‘democratic declaration of the Irish people for Independence’ is sufficient to allow for reunification.

With relation to Brexit the party suggests that ‘Irish reunification could mitigate for these impacts [in relation to the all-island economy suffering and workers in cross-border businesses losing jobs]. To this end it argues ‘Britain out of Ireland and Ireland out of the EU makes political, economic and strategic sense’.

Saoradh is a party founded by dissident Republicans in 2016.…

See Saoradh in the archive