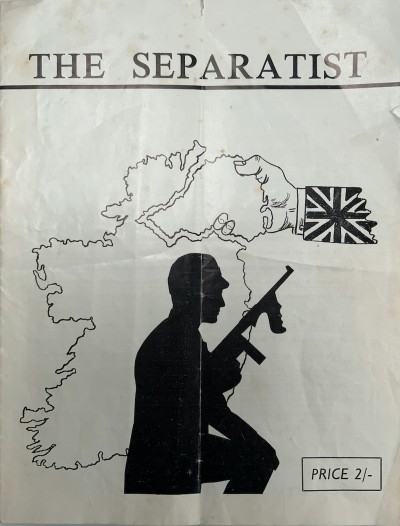 Many thanks to BH for forwarding this to the Archive.

This publication, issued by the Irish Publicity Service, essentially Sinn Féin, in 1966, is of striking importance given that it outlines the position of the IRA and Sinn Féin during that period, well in advance of the start of the conflict. It contains a number of articles, including ones on ‘How it all began’, ‘Partition and Force’ and Lost Liberties, this last being a ‘legal analysis of the Offences Against the State Act…written by a layer who is both a barrister and a solicitor’. The pamphlet restates that ‘Sinn Féin, if elected without a majority, will not take its seats in either Leinster House or Stormont’.

The Introduction is of particular interest and worth reproducing in full.

Republicanism is hardly ever discussed calmly. To most people the I.R.A. and Republicanism in general suggests gun-toting youths, fanaticism and misguided old men living in the past. They rarely get an opportunity of putting their ideas across to the public and as a result it is easy for the Press and Government to dismiss them as crackpots and dreamers. Ridicule of this nature is one of the hardest enemies to fight. Consequently they are always on the defensive, and ill-informed abuse tends to make them aggressive in discussion. Emotion or no emotion, Republicanism must be prepared to stand examination; to embrace or reject it without examination is folly.

This we may lay down as a first principle. We do not understand any doctrine until we understand what its attractions is for its supporters. This year more attention than ever will be focussed on Republicans and the I.R.A.. How will they emerge from this close scrutiny? What is it that attracts Irishmen to the Republican cause? What is it that makes them risk their jobs, freedom and even their lives? One thing is certain, the I.R.A. cannot be dismissed as mere gunmen screaming for blood. There is overwhelming support in the Republican movement today for a more realistic approach to Ireland’s ills. This school of thought is disgusted with the way Ireland (32 counties) has been ruled for the past forty four years and advocates sweeping social reforms especially in Education. They point out that Britain has changed its policy towards the 26 Counties and now rules by economic rather than physical means. they will fight this cheque book invasion, changing tactics as it suits them. This does not mean the I.R.A. will lay down the gun, for they still believe that the final changing of power will come only with the threat of, if not the actual use of force.

Finally we believe that many of those who attack Republicanism to so out of ignorance, and some because they fear it threatens their own economic wellbeing. They are satisfied with things as they are and worry that in some new arrangement their own share will be less. It is nauseating that when men thus motivated attack Republicanism as Communism, Fascism and Terrorism, dragging God in on the side of their own self-interest.

Therefore the Irish Publicity Service in publishing this booklet hopes to present the reader a completely objective report on Republican theory and practice and it asks its readers to consider this survey impartially and to decide for themselves whether this organisation deserves the persecution and hostility it gets or whether a neutral if not sympathetic attitude should be adopted towards it.

Other pieces examine ‘Ireland in the Seventies’, notable for no sense of the events that would soon engulf the island, and a final piece where ‘We made contact with the I.R.A. by means of a friend who knew someone who was a member of that organisation.’ This consists of an interview with members of the IRA at a training camp.

Meticulously cleaning his Bren gun another volunteer said, ‘The essential work of the Republican movement at present is to stop the erosion of our national, cultural, social and economic life by the forces of British imperialism…Before we face the British Government we must united the people in a mass freedom movement. To do this we must give leadership on all issue that in any way touch the National question. For example, we must involve ourselves in struggles for better housing, more employment, etc. We must fight emigration, bad conditions, factory closures and the foreign take-over of land because it all stems from partition and the economic dominance of this country by Britain…’

‘Is this not James Connolly’s idea of agitate, educate and organise?’

‘This mass freedom movement you mentioned earlier, what will it be like?’

What is it like should be your question. The freedom movement of the 70’s is already taking shape. In this country (North and South) inequality and injustice are paramount. We have started fighting this… we have shown the people that their fight is our fight…Economic independence is not enough. The I.R.A. want a Gaelic culture and social justice and they want the British Army out of the 6 counties. If Tommy doesn’t go peacefully, they’ll drive him out. They are experts on guerilla warfare and are confident that military action in the future coupled with economic resistance now, will win them the support of the Irish people.