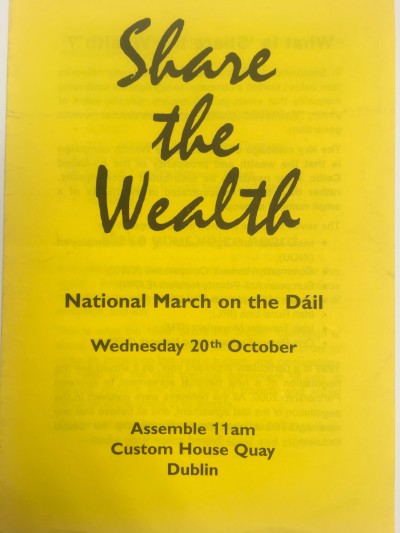 This four page document released by the Share the Wealth campaign in 1999 publicises a National March held by them in October of that year.

The document notes that Share the Wealth was established in September 1998:

… by the national anti-poverty networks… to highlight the continuing inequality that exists in Irish society, despite years of strong economic growth and substantial wealth generation. The key message of the campaign is that the wealth and prosperity of the so-called Celtic Tiger needs to be distributed more equally, rather than being concentrated in the hands of a small number of people.

It also notes the significance of 1999 since a new national agreement ‘to succeed Partnership 2000’ would be negotiated that year and that all the organisations within Share the Wealth had participated in the negotiations of the previous national agreement.

The Share the Wealth Campaign was established in 1998 to highlight inequality in Ireland.…