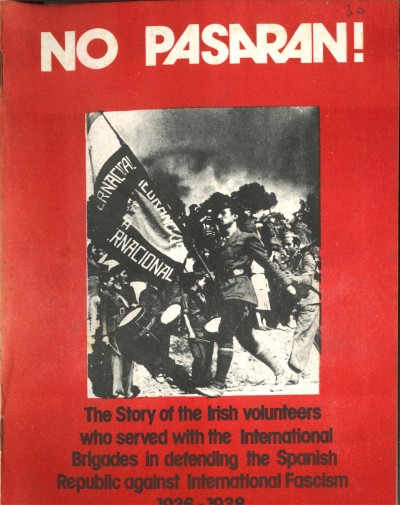 This document was issued by the Belfast Executive of the Republican Clubs in 1975. It is dedicated to ‘the memory of two Socialist Republicans, killed by reactionaries at home and abroad’ and mentions Volunteer Jim Straney of the IRA, killed in action with the 15th International Brigade in Spain in 1938 and Volunteer Tom Berry of the IRA, ‘murdered by Provisionals, Belfast 1975’.

The overall leaflet examines section by section the International Brigades and the course of their involvement in Spain during the Civil War. There is an introductory section on their history, then the course of various engagements, Jarama, Brunette, Aragon, Belchite, Teruel to Ebro and the Ebro Crossing and then the aftermath of the war. It also devotes four pages to Paddy MacAllister who fought in Spain.

A good eight pages of 40 odd printed pages is taken up by the Introduction which seeks to argue that:

The Provos, founded, armed and led by rank reactionaries, are standing in the path of historical progression, and inevitably they will be destroyed by that progression. For, clearly, despite the opportunistic jargon about Socialism, the Provos cannot escape the fact that as a result fo their own political rationale, they are potentially a Fascist movement at a time when Fascism, in the classical model, cannot survive. Thus in this situation, where forces far beyond the simplistic naïveté of the Provos have already determined the lines of the forthcoming battlefield, the Provos ultimate end (and that of their Loyalist counterparts), is written large.

It also argues that there are:

The advanced capitalists, the supporters of the multi-nationals, the modern Imperialists, and the ultimate enemy, obviously include FG, right-wing Irish Labour, the larger section of FF, all in the South, the Alliance Party, SDLP, elements of the Official Unionist, and for what it is worth, the Northern Ireland Labour Party. And it continues by suggesting that there is another group including: Backward elements of FF… the Official Unionists in the North, the DUP, plus the Baird Axis, follows by the paramilitaries such as the Provos, UDA and UVF all stand together on this question at least… none of them have progressed far enough to understand that the days of capitalism in its native protectionist phase have gone for ever.

And it suggests that this latter camp will be destroyed by ‘squabbling internally or attacking each other’ and that there will be ‘an inevitable victory of the advanced capitalist camp’. And in order to move the situation on the Republican Movement must ‘bring together the strength of all the anti-Imperialist forces’ in order to prosecute the ‘primary struggle against the particular manifestation of Imperialism which most closely affects them, being clear all the while that the Socialist Republic itself can only be established by a dynamic movement under the leadership or the working class’.

Where We Stand: The Republican Position (1972)

Republican Clubs in the archive