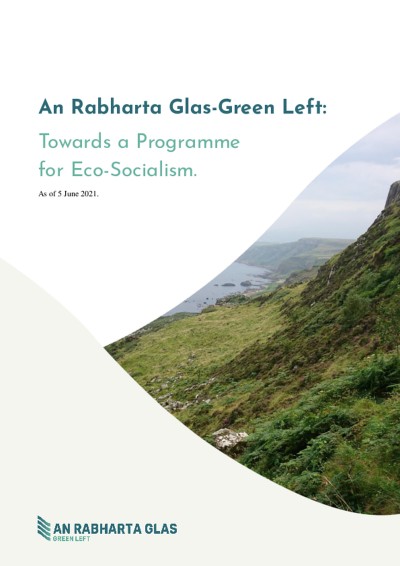 A timely and interesting addition to the Left Archive with the founding programme of An Rabharta Glas-Green Left, the newly formed Eco-Socialist political party (their website is here ). As noted on Wiki :

An Rabharta Glas – Green Left ([ənˠ ˈɾˠəuɾˠt̪ˠə ɡlˠasˠ], “The Green Tide/Flood”)[2][3] is an unregistered Irish political party, launched on 5 June 2021 as a split from the Green Party. It has two councillors, who had previously been elected as Green Party members — Lorna Bogue, on Cork City Council, and Liam Sinclair, on South Dublin County Council.[4] Its outlook has been described as “eco-socialist“.[1]

This document which is twenty pages long describes itself as being ‘Towards a Programme for Eco-Socialism’. It contains two broad sections, one titled ‘Analysis’ and the other titled ‘Approach’. Under the former section various areas are addressed including ‘The political system and the economy, ‘counter-hegemony and intersectionality’ and ‘class politics’. Under the latter section consideration is given to areas such as ‘Eco-socialism’, ‘State power’, ‘Renewing the commons’ and ‘Electoral politics and policy’. An ‘Agenda’ is offered and a Conclusion arrived at.

The document primarily addresses the Republic of Ireland, though it notes that ‘The party will seek to develop its approach to Northern Ireland in future documents’.

There document notes in relation to class politics that:

Little progress however is being made on the class7 front. Class is the glaring vacuum at the core of Irish politics. Of the few political parties, trade unions and other organisations which grapple with class formation as a serious objective, none have managed to articulate and promulgate class politics to a wider audience. Several organisations which claim to represent ‘the working class’ have variously been subsumed into normative neoliberal governance or lack a strategy for a transition to socialism beyond fomenting transient anger. Outside small bubbles of activism, virtually no political discussion takes place on class formation as a substantial objective, despite the atomisation and alienation of the most disadvantaged sections of Ireland’s working class being quite obvious during the pandemic.

The party explicitly looks at the Democratic Socialists of America and Podemos as offering “examples of a successfully operationalised class politics of ecosocialism in tough circumstances”. And it agues against the approaches of Die Linke and SYRIZA with respect to the ‘pitfalls of eschewing class politics’.

Based on this analysis, we seek to offer a demonstratively new prospectus: we are not offering “green” capitalism like the Green Party, nor “green” socialism like the smaller Left parties, but ecosocialism. Eco-socialism symbiotically and inextricably unites the twin objectives of decarbonising human activity and transitioning from a capitalist society to a socialist one. While individual definitions for either of these objectives vary, perhaps the most important role of ARG-GL is to establish the frame for developing eco-socialism in Ireland within the limited time frame permitted by climate emergency [emphasis in the original – ILA].

Relating our vision of eco-socialism to the everyday lives of working people is a task which ARG-GL takes as being of equal priority to the mechanics of advancing our political programme. This means inverting the lens on the spatial and social order of villages, towns and cities, workplaces, homes and communities to demonstrate that not only can working people be in control of their lives and the spaces in which they live them, but they must be if people and planet are to survive in the coming decades. Offering a prospectus based neither on designed utopias nor wishful thinking, but on the momentum and space produced through and by popular struggle, has the power to reverse the truism so that it is easier to imagine the end of capitalism than to imagine the end of the world.

An Rabharta Glas - Green Left is an eco-socialist party founded in 2021.…

See An Rabharta Glas - Green Left in the archive