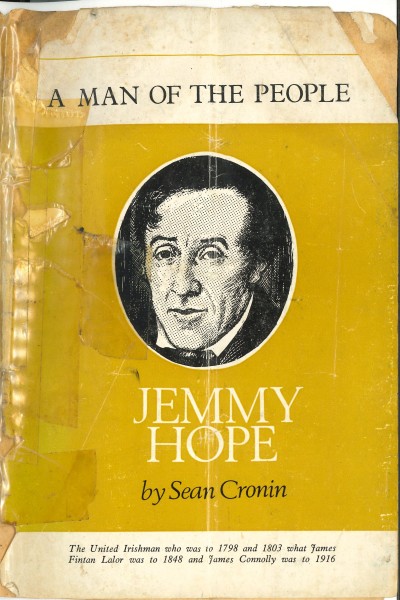 This is a document of considerable interest, a twenty-eight page pamphlet, written by Sean Cronin and published by Sceim na gCeardchumann. This latter was ‘an independent educational, social and cultural association which promotes a knowledge of the language and history of Ireland among trade unionists. Established in the late 1950s the organisation was very active in the 1960s but effectively became defunct in the early 1970s (for more on this John P. Swift’s biography of Brendan Scott has some detail).

The pamphlet notes that it was decided to:

…mark the bi-centenary of James Hope’s birth (25th of August, 1764) by commissioning and publishing this study of the great United Irish organiser’s life, times and ideas.

The Templepatrick-born weaver commanded the famous Spartan Band under Henry Joy McCracken at the Battle of Antrim in June, 1798, and organised the workers of Dublin behind Robert Emmet in 1803. But it is as a social thinker that the name of this Ulster Presbyterian Republican and early trade unionist deserves to be remember in Dublin, Belfast and indeed all parts of Ireland.

And the document notes that Cronin is ‘a Dublin journalist, writes on Irish social and political questions. He published a short study of Wolfe Tone and the United Irishmen in 1963. He has written a number of pamphlets on partition and its effect on the economic and political life of the nation’.

The Introduction, written by George Gilmore is worth reproducing in full:

When the Volunteers of 1782 won for Henry Grattan the measure of legislative independence that he valued he lauded them as “The armed property of the nation”. Later, when they removed the crown from their uniform buttons and supported Tone’s cam­paign for “The Rights of Man in Ireland-the greatest happiness of the greatest numbers in this island”, he denounced them as “The armed beggary of the nation”.

The play of social forces so sharply stated by Grattan was understood better, perhaps, by Jemmy Hope than by any of his con­temporaries who have left their views on record. His vision was clear, and from his viewpoint on life he had no escape.

We are inclined to speak too glibly of “Betrayals”. Different viewpoints make for different real objectives, and fine phrases are subject ‘to reinterpretation. In our own day we have seen the rulers of the Twenty-six County state (under any name) evolve what a disappointed Indian ambassador called “A kind of nationalism that is not anti-imperialist”. It is good to see a renewed interest in the play of forces that went to the making and the breaking of so many efforts for – national independence. It is high time that something of the clear vision of the leader of McCracken’s “Spartan Band” should be brought to bear on the “Green Paint” politics of to-day.