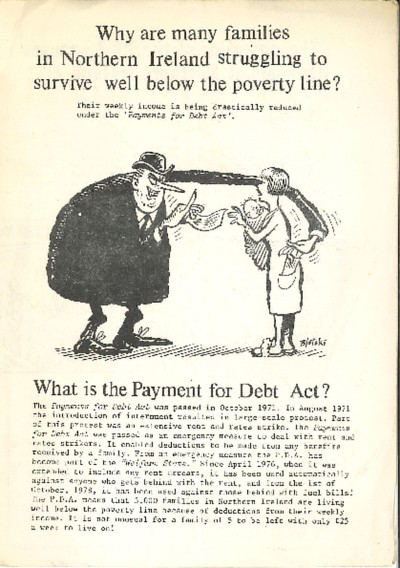 It is a short four page leaflet dating from 1979 which was printed by Belfast Women’s Groups. The leaflet deals with the Payments for Debt Act:

As the leaflet explains:

The Payments for Debt Act was passed in October 1971. In August 1971 the introduction of internment resulted in large-scale protest. Part of this protest was an extensive rent and rates strike. The Payments for Debt Act was passed as an emergency measure to deal with rent and rates strikers. It enabled deductions to be made from any benefits received by a faraily. From an emergency measure the P.D.A. has become part of the “Welfare State.” Since April 1976, when it was extended to include any rent arrears, it has been used automatically against anyone who gets behind with the rent, and from the 1st of October, 1978, it has been used against those behind with fuel bills! The P.O.A. means that 3,000 families in Northern Ireland.are living well below the poverty line because of deductions from their weekly income. It is not unusual for a family of 5 to be left with only £25 a week to live on!

The leaflet includes examples of how the PDA is used and impacts on families. And it notes:

The first thing that you can do is try and enter into a votuntary agreement with the retevant body concerned to pay back the debt at a reatistic amount that you can afford. This way you witt be entitted to a rent and rates rebate white you are paying off the arrears. If that faiis, that is if the Executive refuses to aiiow you to make a votuntapy agreement you can write to B.A.B. outtining your famity circumstances and informing them of the hardship that the deductions are causing you. They wiU then review your case and inform you of the outcome. If they decide in your favour and reduce the amount it witt take 5 weeks before it comes into effect.

It also calls for the repeal of the PDA and:

In the short term we demand:

It also notes ‘EVERYONE AFFECTED BY THIS ACT, TRADE UNIONISTS COMMUNITY GROUPS, PEOPLE LIVING ON STATE BENEFITS, WOMEN’S GROUPS, ETC., SHOULD WORK TO OPPOSE THE PAYMENT’s FOR DEBT ACT. ‘

Any further information on the provenance of the leaflet and the campaign would be welcome.