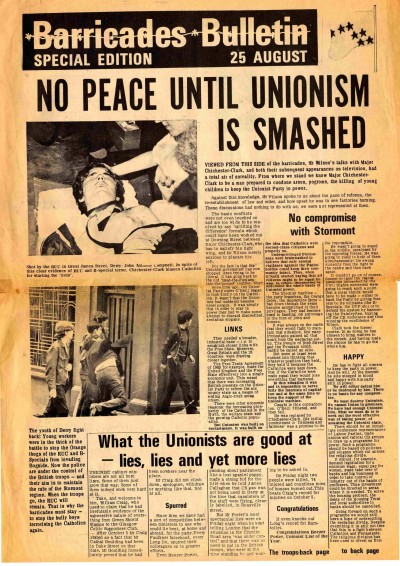 This document was issued on 25th August and is perhaps best seen as being of a piece with other materials in the Archive from the 1969-1970 period. This document, one of a series, was issued by the youth section of the Derry Labour Party and perhaps points up the difficulties implicit in organising on a left platform in Derry, and more broadly Northern Ireland, during this period.

The Derry Labour Party was founded in 1965 by Willie Breslin, Ivan Cooper and Dermie McClenaghan. Willie Breslin gave the following testimonial as regards the DLP at the Bloody Sunday Inquiry in 2002:

…the Derry Labour Party had been founded in 1965 in an attempt to tackle social injustices that were rife in Derry at the time, affecting both the nationalist and loyalist working class people of Derry. The party had approximately 40 members in 1965, consisting of trade unionists, teachers and businessmen. These numbers increased steadily and, by 1968, the party had to divide into two branches as they could not find venues large enough to host meetings with all party members.

Unsurprisingly Breslin alluded to the tensions the party faced.

A number of the party members were also elected to the Citizens Action Committee (CAC). Mr Breslin said that, after the Stormont elections in 1969, the CAC became largely ineffective, so he suggested that Ivan Cooper, John Hume and Claude Wilson should stand as candidates in the local elections. Ivan Cooper and John Hume were both elected. However, Mr Breslin said that the manner in which the election was approached missed the opportunity to cross the sectarian divide. Issues such as poor housing, unemployment and low pay were issues affecting both Catholics and Protestants and he felt that the civil rights movement could have enabled a move away from sectarianism. He said that the Battle of the Bogside proved to be a death knell for the Labour Party, along with many other parties: many people dropped out of politics or stopped voting, and the party lost a number of people to the communist ideology of the Official Republican movement.

A number of those involved in the Young Socialists went on to Militant and later the Socialist Party. Indeed it is clear that there were strong links at the time between Militant and YS members of the DLP with extracts from other issues of Barricades Bulletin being printed by Militant [as can be seen here ].

There should be an immediate conference representative of Labour Parties, trade unions and radical CR groups to draw up a programme for power. Such a programme should be based on policies and slogans which cut across the religious divide. It should, for example, demand legislation for a minimum wage, equal pay for women, state take over of banks and big business in order to take control of industry out of the hands of profiteers…. Going forward on such a programme we would still have a hope of undercutting the religious divide.

There is also sharp criticism of the ‘Unfree State’ in another article.

The sabre-rattling along the border is designed not to intimidate, nor even to influence Stormont and Westminster, but to head off the protests of people of the South against their government’s inaction.

And this is also followed by criticism of Fianna Fáil.

Fianna Fáil calls itself ‘the Republican Party’. It distinguishes itself from Fine Gael by its sporadic expressions of militant anti-partition feeling. So at a time like the present, in order to justify itself it has to bluster a bit.

There’s also a prescient piece entitled Troops: when the honeymoon is over which notes that:

Chichester-Clark said that the existence of the state of Northern Ireland was not in question. It is precisely that. We have questioned it here.

Barricades Bulletin was produced by the Young Socialists of the Derry Labour Party.…

See Barricades Bulletin in the archive