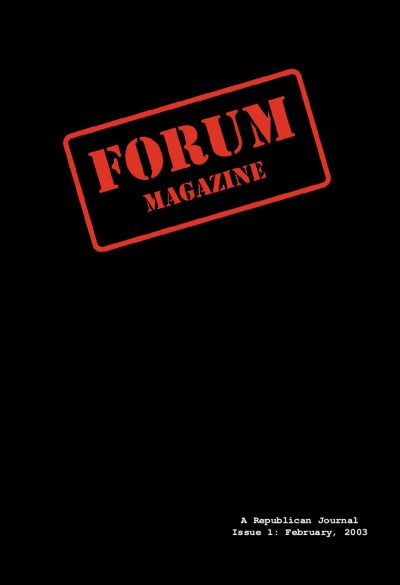 This magazine, from The New Republican Forum was published in 2003.

The last page notes that:

The New Republican Forum is a coalition of political and community activists, founded to challenge the political status quo in Ireland by providing a radical Republican alternative to the mainstream political establishment.

In essence The New Republican Forum was established by a group around former PIRA and RIRA member Michael McKevitt following their leaving or being expelled from the latter organisation after a dispute between prisoners in Portlaoise and the leadership of the organisation.

The magazine has an interview with a Community worker on the drugs issue in Dublin. Another examines allegations of corruption in the Garda. The 1972 State Papers only then recently released are considered. The issue of the use of Shannon by US military aircraft is discussed as is Iraq.

There’s an interesting interview with a representative of Republican prisoners in Portlaoise (these would be RIRA prisoners).

Q9. What realistic strategic options are open to republicans opposed to British rule in Ireland?

At this time it is important that republicans accept political reality regardless of how unpalatable it may be. It is obvious that there is no support for armed struggle in Ireland at this time. And without popular support any armed campaign against British rule is doomed to failure. We believe it is the moral responsibility of the republican leadership to terminate any campaign when it becomes obvious that its continuance is futile.

Indeed, following the split with the Provisionals, many of the individuals who reconstituted the IRA agreed that if the campaign showed clear signs of being ground to a halt, it would be terminated rather than continued in an ineffective or irregular manner.

Many republicans also believe that it is immoral to jeopardise the lives of non-combatants and risk the lives and liberty of IRA volunteers as part of a non-existent campaign which has been reduced to an attempted operation every couple of months.

This is even more so when a corrupt and discredited leadership is directing such a campaign. Our acceptance of political reality does not entail any ideological concessions. We continue to remain steadfastly opposed to the Belfast Agreement. However, in an environment where armed struggle is not a viable option it is our duty to resist British rule in Ireland by all other means at our disposal.

At all times republicans must remember that the objective of our struggle is the removal of the British presence in Ireland and not the employment of armed struggle at any cost.

So, if Republicanism remains a potent ideology, why has it been. such a political failure? Why have all Republican military campaignsended in defeat? Why has the Republican movement been repeatedly betrayed by its own leaders? Why has the movement consistently failed to mobilize mass support in the South when such support was, at times, clearly visible? And above all, why has a secular, non-sectarian ideology failed so completely to win support from working class Protestants in the North?

New Republican Forum was a radical Republican organisation formed in the early 2000s by a group around Michael McKevitt, after he had left or been expelled from the Real IRA. It published a magazine, Forum.…

Forum was published by New Republican Forum, starting when that organisation was formed in 2003. It appears to have continued until 2006.…

See Forum in the archive