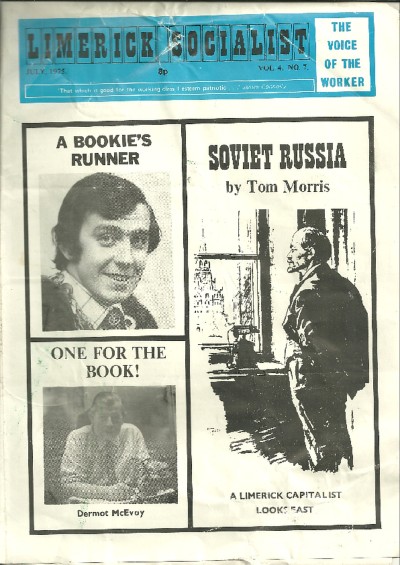 …was established by Jim Kemmy and others following his departure from the Irish Labour Party. Subsequently the LSO and members of the Socialist Party of Ireland and the British and Irish Communist Organisation came together to found the Democratic Socialist Party.

This edition from the mid-1970s carries a range of articles. One by Dermot McEvoy looks at the Finance Minister Richie Ryan of the Fine Gael/Labour coalition then in power. Another examines a Ground Rent Protest in Limerick.

Another examines aspects of the 1916 Rising that took place in and around Limerick, albeit in a somewhat satirical tone.

A letter to the paper on ‘Perks and Privileges’ is captioned ‘This letter submitted by Tom Morris, President of the Limerick Chamber of Commerce, presents a local capitalist’s view of Soviet Russia, seen through the eyes of two anti-communist writers’. And it promises that in the next edition there will be a reply to the letter.

Other pieces engage with recent Catholic pastoral letters, and one looks at the supposedly ‘free Child care’ and notes ‘like so many other things in our society, medical treatment is closely related to money and to the income of doctors and specialists’.

Interestingly almost the only mention of Jim Kemmy is on the last page article that looks at Limerick City Council and the ‘performance of Labour Council members’.

See Limerick Socialist in the archive