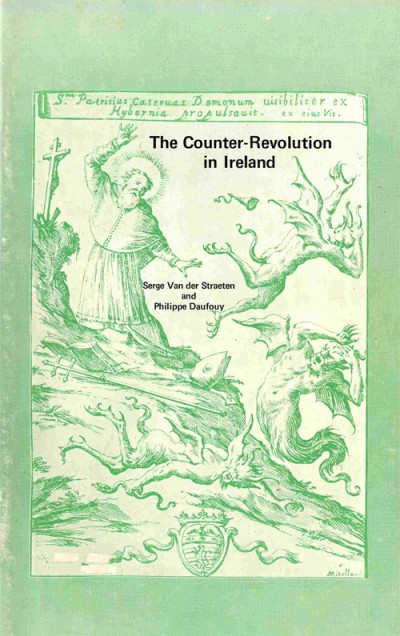 This is an unusual addition to the Archive, a pamphlet from the anarchist tending Black and Red Press in Detroit.

It is a reprint of an article, written by Serge Van der Straeten and Philippe Daufouy and translated by Rut Nybakken and Lorraine Perlman, which appeared as ‘La Contre-revolution Irlandaise’ in Les Temps Modernes  in 1972.

The document starts with a quote from Henry Joy McCracken ‘The rich always betray the poor’. It takes an interesting line on the situation in Ireland, North and South, providing an history and overview that ranges back to the 18th century. It has a fairly sharp tone, consider this footnote on page 11.

The prospect of a socialism built by workers and small farmers seems to have held little attraction for Marx. His hatred for the manure pile, the henhouse, the yokel, would have put him in a good position to analyze the history of the Irish Republic and to accurately evaluate the Irish Left.

For a flavour of the analysis consider the following, taken from pp.38 and 39.

The geographic location of the Catholic ghettos, particularly in Belfast, favoured the military intervention of the Provisionals, who implemented themselves in view of the permanent threat which hung over these districts. The I.R.A. Claimed to be a useful weapon of self-defense against the constant terror in which the Catholic population lived. But along with the Protestant paramilitary organizations supported by the Orange Order, the I.R.A.’s attacks are the cause of the veiled civil war and consequently, of the terror. The forms of popular organization which arose during this nationalist phase of the conflict (popular tribunals, health clinics, ‘national’ and public meetings, workers’ productive co-operatives, etc) which some people want to see as proletarian forms of organization, are only direct consequences of the civil war.

This leads to the following provocative conclusion:

They are no more proletarian than the French ‘popular tribunals’ set up after the Liberation, which set out energetically to liquidate the revolutionary elements and to shave women’s heads in the public square. Due to its military weakness, the I.R.A. Is incapable of winning the war against the Protestants and British Army and is reduced to proposing constitutional solutions of compromise. Whether they favor a federalist solution which includes four provincial parliaments, or a centralized solution (a ‘republic of workers and small farmers’), both wings of the I.R.A. Offer the worst solution for the Irish proletariat: namely, an alliance with the least progressive classes around a populist economic program. In practice, this solution can only mean fascism, conceived as a military dictatorship with the mobilization of workers into unions.

However, this is merely a diversion in respect of the ultimate proposals that the document makes.

Along the way there are harsh words for a range of familiar formations including, but not limited to, People’s Democracy and the Irish Communist Organisation.

It’s also worth looking at the Black and Red Press  itself which was founded in 1968 and in particular Fredy Perlman.

After scanning this it came to our attention that the text is available here on libcom.org . Those of us involved in the Archive believe that posting the full original documents gives a better sense of them as political artifacts positioned within a specific place and time as well as providing a one stop easily accessible repository for these materials.

Black and Red Press is an anarchist-leaning publishing outfit in Detroit. As it notes on its website, it has been:…

See Black and Red Press in the archive