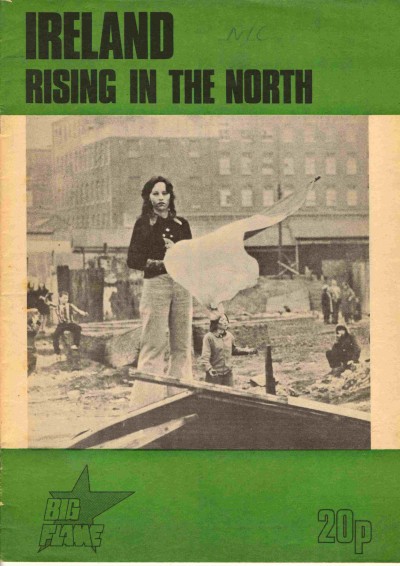 When researching the document, which was donated by a reader - for which many thanks, I discovered that it was already scanned and online , albeit in three parts, at this Big Flame site , along with what appears to be the near totality of their documentation. But given that I did scan it, and information is free, it seems like an appropriate addition to the Archive regardless - wbs.

This is a fascinating document issued by Big Flame, the initially Maoist group originally based in Liverpool and founded in 1970. Big Flame was in intent closest to the Italian Lotta Continua group, and during an eclectic history between 1970 1984 attracted a varied range of support, even to the extent of seeing an anarchist grouping merge with it.

The history of Big Flame can be found here , and John Sullivan gave an overview of the organisation here . But a flavour of their approach is given by the frontispiece:

We are a Marxist organisation; but we are not Maoists, Stalinists or Trotskyists. We see ourselves as inheriting a revolutionary Marxist tradition which includes many revolutionaries, but we see their writings as the collective voice of the particular period of class struggle that they were involved in. It’s a tradition which also includes the revolutionary actions of working class people throughout history. … Big Flame groups exist in Birmingham, Liverpool, Manchester and London. We are active in hospitals, car and other factories; among housewives, tenants and students. We also work in the Troops Out Movement and Chile Solidarity Campaign. Nationally, our work is co-ordinated through Waged Workplace, Education, Women’s and Ireland Commissions, and overall by a National Committee

As the frontispiece also notes:

Big Flame is a revolutionary socialist organisation. We are publishing this pamphlet on Ireland because we hope it is of use to the Irish revolution. The class struggle being fought in Ireland is of absolute importance of the Irish working class, for the English working class and for working class power everywhere. Yet it is hugely misunderstood, even on the left here. We must understand the importance and content of that struggle. The struggle of our brothers and sisters in the Catholic ghettoes of the Six Counties of Ireland occupied by our bosses’ army is our struggle too. We hope that this pamphlet helps understanding of the mass struggle of the Irish working class and helps in building the Troops Out Movement which is currently the focus of Big Flame’s activity around Ireland. The TOM is the main weapon we have. That is why we have worked with it since its foundation. We work in the interests of the Irish struggle. Our struggle is in common.

The document is of particular interest since it seeks to give an overview of the conflict. Across 32 printed pages it deals with a variety of issues, ‘A Question of Class’, ‘Loyalism and the Orange Order’, ‘The Secret War’ and includes interviews with a variety of individuals. These include interviews with nationalist women and men in the North and a member of a relief committee.

…we in Big Flame say that the important organisations in Ireland - the organisations from which will come any revolutionary movement - are the Provisional Republican movement, the People’s Democracy and the IRSP. We say this because these are the three main organisations that have shown any understanding of the Northern struggle and its leading role in the Irish revolution.

It dismisses both the Socialist Workers Movement and the Official Republican Movement, though conceding that the latter ‘could play a role in the immediate defence of the Republican areas’.

The IRSP it posits has been insufficiently clear that it considers the national struggle to be paramount.

In relation to the Provisionals it notes:

Whether the left-wing in and around the Provisionals can emerge as the conscious and organised vanguard of the Irish working class, that remains to be seen. At some time it will require a clear break with the petit-bourgeois tendencies in the movement. But for the time being - with the prospect of civil war - there seems little chance that this clear break will happen.

And it makes an interesting claim when it suggests that:

Recently an armed group who follow the political line of People’s Democracy, the Revolutionary Citizen’s Army, has been formed. The effect this could have on PD’s role in the struggle could be significant.

Another interesting assertion is the following:

The Officials were then, and still are, dominated by members of the Irish Communist Party.

In sum a useful document that indicates at least some of the perspectives from the United Kingdom during the mid-1970s.

Big Flame was “a revolutionary socialist feminist organisation with a working-class orientation” in the United Kingdom. Founded in Liverpool in 1970, the group initially grew rapidly, with branches appearing in some other cities. Its publications emphasised that “a revolutionary party is necessary b…

See Big Flame in the archive