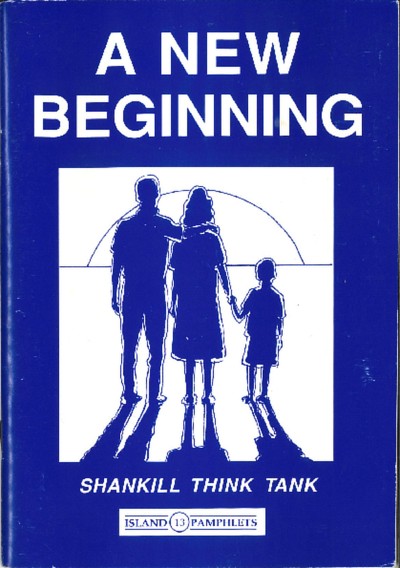 This document, issued by the Shankill Think Tank in 1995, although not from a left political organisation or party offers an angle on class from a unionist and loyalist perspective and makes a ‘call to both working-class communities [in Northern Ireland] to assert their right to be heard. It seeks to explore the issues that lie at the heart of our communal divisions, and challenges people of both ‘traditions’ to redefine their aspirations more inclusively. Finally, the Shankill Think Tank reiterates its belief that only through debate and dialogue within and between our two communities can we ever hope to set this society on the path to a new beginning.’.

The Shankill Think Tank as noted on cain.ulster.ac.uk :

…was created in 1993 for the purpose of stimulating debate within the Protestant working class – believes that much of this uncertainty is due to the inability of our politicians to initiate purposeful dialogue, and the fact that the ordinary people of Northern Ireland – the ones who have most to gain by a genuine peace – have been given no real say in the ‘peace process’.

A list of contributors is as follows and included members of the UDP and the PUP:

Over a year has now passed since the IRA and Loyalist ceasefires, and yet in some opinion polls half those questioned feel a return to violence remains a definite possibility. Why does such widespread disbelief in the prospects for a permanent peace still prevail? Some claim it is because none of the weapons of war have been ‘decommissioned’; others say it is because ‘all party talks’ have not commenced; some point to the obvious lack of willingness among our politicians to embrace a purposeful ‘peace process’; while others remind us that it is unrealistic to expect the fears and suspicions, let alone the pain and grief, occasioned by twenty-five years of unremitting violence, to be easily or hurriedly set aside.

And the document addresses Nationality and Heritage, Pluralism, Democratic Structures, Community Empowerment and offers an Agenda for a New Beginning. Again, notable is the focus on working class communities in the North.

Working-class areas have suffered disproportionately throughout the past twenty-five years of violence, and those in prison as a result of the conflict are overwhelmingly working class. This ‘political’ reality has simply added its own burden to a negative socio-economic reality which has never been fully acknowledged.