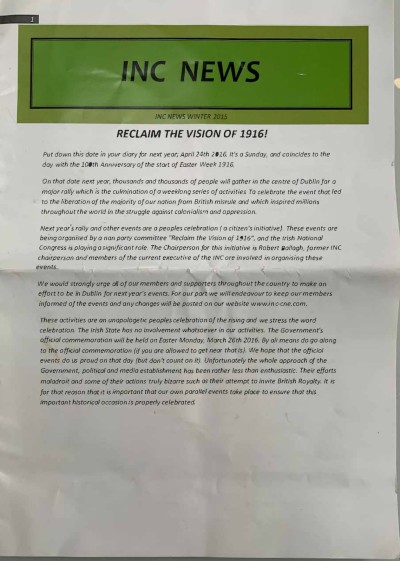 This document is the first from the Irish National Congress added to the Archive. As noted on wikipedia :

The Irish National Congress is an Irish republican organisation formed in December 1989 to prepare for commemoration of the 75th anniversary of the 1916 Rising. Its members work on a non-party political, non-sectarian basis for a united Ireland, and human rights. They campaign on various other issues such as justice and peace, investigations into political deaths of nationalists and civilians in Ireland, and Irish neutrality.

The INC website appears not to be functioning currently.

In eight pages it covers the commemoration of 1916, examines the life of Jeremiah O Donovan Rossa and considers the 1971 Ballymurphy Massacre in Belfast.

The front page piece under the heading RECLAIM THE VISION OF 1916! argues that the readers should:

Put down this date in your diary for next year; April 24th 2016. It’s a Sunday, and coincides to the day with the 100th Anniversary of the start of Easter Week 1916.

On that date next year, thousands and thousands of people will gather in the centre of Dublin for a major rally which is the culmination of a weeklong series of activities. To celebrate the event that led to the liberation of the majority of our nation from British misrule and which inspired millions throughout the world in the struggle against colonialism and oppression.

We would strongly urge all of our members and supporters throughout the country to make an effort to be in Dublin for next year’s events. For our part we will endeavour to keep our members informed of the events and any changes will be posted on our website http://www.inc-cne.com.

Unfortunately the whole approach of the Government, political and media establishment has been rather less than enthusiastic. Their efforts maladroit and some of their actions truly bizarre such as their attempt to invite British Royalty. It is for that reason that it is important that our own parallel events take place to ensure that this important historical occasion is properly celebrated.

See INC News in the archive