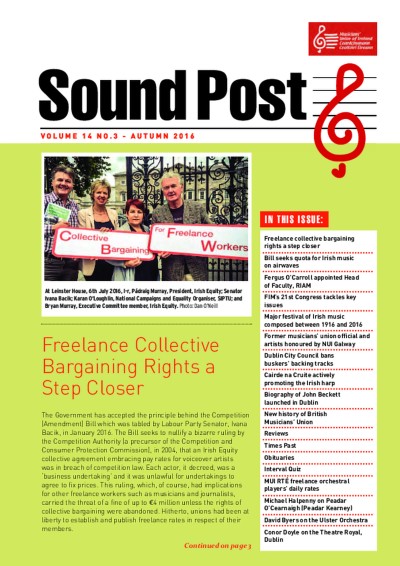 This is an unusual and welcome addition to the Archive, being the regular publication of the Musicians’ Union of Ireland/Ceardchumann Ceoltóirí Éireann, Sound Post. The MUI/CCÉ is affiliated to SIPTU. As noted in the magazine:

A forum of free expression, Sound Post welcomes material from MUI members. Unless explicitly stated, the views expressed in this newsletter, including goods and services promoted in advertisements, are not necessarily endorsed by the Union. Sound Post is compiled and edited by John Swift, former MUI Secretary, and produced by the Communications Department of SIPTU.

The range of articles in the publication is very varied, and includes news for union members, as with the cover story about ‘Freelance Collective Bargaining Rights A Step Closer’ and another on a Bill seeking a quota for Irish music on airwaves; material on the history of music composed in Ireland and book reviews.

On Collective Bargaining the publication notes:

For well over a decade, the Musicians’ Union of Ireland, Irish Equity, SIPTU and the National Union of Journalists, actively supported by the Irish Congress of Trade Unions, have campaigned vigorously for the full restoration of collective bargaining rights in respect of freelance workers.

As part of its campaign to challenge this blatant injustice, the unions made persistent representations to politicians of all persuasions to take whatever steps were necessary to remedy the situation. Despite specific commitments from Ministers and other TDs to address the freelancers’ grievance, nothing tangible has so far emerged.

Under revised bye-laws, which came into force on 1st August 2016, Dublin City Council has banned the use by buskers of backing tracts on the capital’s streets and the use of “lewd, offensive or racist language or conduct”, including in song lyrics. A two-week visiting performers’ permit for €10 now applies, as does a six-week probationary period for performers with a one-year permit.

There are pieces on The Theatre Royal, constructed in 1935 and demolished less than 30 years later in 1962. Another looks at the Ulster Orchestra, then celebrating fifty years, and there is a long piece on Peadar O’Clearnaigh (Peadar Kearney) and the Irish Revolution. Padraig Yeates reviews Saothar 41 and Cliona Doris reviews John S. Beckett: The Man and the Music and there is a piece on a new history of the British Musicians Union.

In sum an engaging and imaginative means of promoting workers rights in a very specific area.

The Musicians’ Union of Ireland is a trade union representing musicians, music teachers and other music professionals. It is affiliated to SIPTU.…

See Musicians’ Union of Ireland in the archive

Sound Post is a publication of the Musicians’ Union of Ireland.…