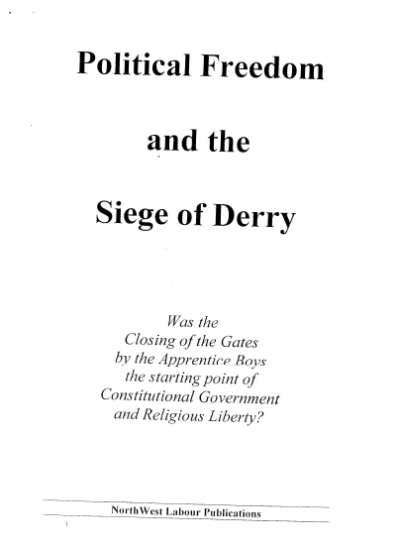 This is an interesting document, in that while it isn’t overtly badged by a left party or formation is clearly linked in some way to the Aubane Historical Society (formerly BICO). NorthWest Labour Publications were based in Derry.

According to the Introduction, penned by Pat Muldowney, it seeks to determine what ‘kind of historic event do the Apprentice Boys commemorate each August? It is time that some attempt was made to give a straight answer’.

And it asks ‘if what the Apprentice Boys commemorate annually is the birth of Constitutional freedom, why is the commemoration resented by most of the people of Derry?’

Following on from that it notes that ‘If the Closing of the Gates marked the birth of freedom, why did Derry itself have to wait until the 1970s for a local government based on the majority? And does not the political history of the city from 1689 to the 1970s suggest the Gates were Closed in the interest of establishing the dominance of an intolerant sect over the mass of the people?’

These are important questions. If the Apprentice Boys commemorate the birth of freedom, socialists should use their influence to discourage opposition to their parade. But if what they commemorate is sectarian supremacy, then it is their activity that should be discouraged.

We begin a discussion of this serious matter by reprinting an article from the Irish Political Review (October 1996).

The document contains the transcript of a Radio Ulster interview with Jonathan Bardon from 1996 which as it notes acerbically ‘[he was brought on] to explain[s] why the siege was a great event in the progress of humanity towards whatever it was progressing towards. Bardon’s exposition was followed by a discussion involving Gregory Campbell of the Democratic Unionist Party and others. Bardon a College lecturer in Belfast, is of Ascendancy background, which is not the same thing as Ulster Unionist background.’

There was a time when the Ascendancy looked down with contempt or embarrassment on Protestant Ulster. But Bardon appears to be entirely in sympathy with it. And Gregory Campbell responded to his sympathy with a due, but nevertheless surprising, nod of deference.

This is followed by ‘a comment on it from the historian Brendan Clifford’. This comment runs for four pages and is structured under headings such as THE TRUTH, WHY THE GATES WERE CLOSED, RELIGIOUS FREEDOM and DEMOCRACY.’