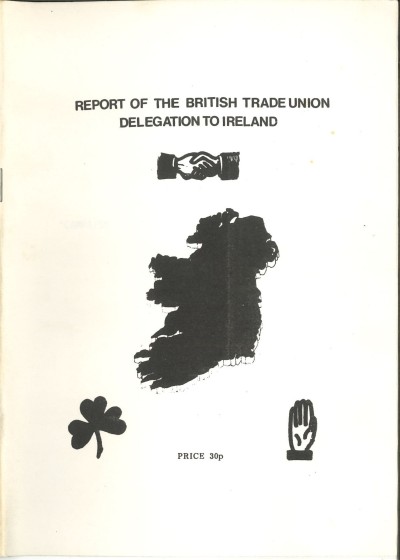 This document was issued on foot of meetings by a delegation of British Trade Unionists with various groups in North and South in the early 1980s (if anyone has the actual date we’d be very grateful. From the text it appears to be c. 1983/1984). Unions represented on the trip included the NUR, TGWU, AUEW, NALGO, TGWU, ACTT and Blackburn and Brighton Trades Council.

Organisations met in the South included:

And those in the North included:

The delegation visited Ireland between the 14th and 20th April to try and assess the situation on the ground as well as to look at the overall question of building links between our respective trade union organisations, in the context of developing solidarity and building initiatives to what is in effect for the Irish people a British problem. Understanding Britain’s role in Ireland is the key to all that we have come to know about the problems faced by the people of the 32 counties.

Our delegation met numerous trade union organisations and a cross section of party political opinion; all were forthright and to the point, illuminating for the members of the delegation, many of the day to day problems faced by a country which has to live with a distorted economic and political life as a result of partition imposed by the British Government under the threat of all out war in 1920.

We believe our delegation lays the ground­ work for a major initiative within the British labour and trade union movement on the basis of building popular pressure within Britain against the continuance of British involvement in Ireland.

There is interesting detail in the Report including observations on the relationship between unions and the Irish Labour Party (then in government). And:

Neutrality, reunification, the armed struggle, NATO and initiatives such as the New Ireland Forum were discussed at great length. Most organisations and trade unions we met were consistent in their opposition to the armed struggle; although it would be true to say that almost unanimously the discussions we had on this most controversial of subjects revealed an under­standing that the cause and responsibility for the violence lay with all previous British Governments and their role in the country.