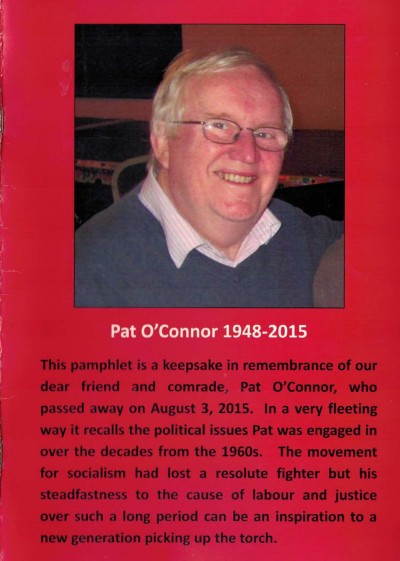 Many thanks to the person who forwarded this to the Archive. This is a short pamphlet on the life of socialist activist Pat O’Connor who died in 2015. As the pamphlet notes:

[this document] recalls the political issues Pat was engaged in over the decades from the 1960s. The movement for socialism has lost a resolute fighter but his steadfastness to the cause of labour and justice over such a long period can be an inspiration to a new generation picking up the torch.

Inside the document starts with a chronological listing of O’Connor’s politics, activities and campaigns, starting with his membership of the Limerick Young Socialists in 1968, through to the Labour Party Young Socialists, his being ‘close to the Official Republican Movement – interested in their potential for revolutionary politics’, the Socialist Labour Alliance, and being a founder member of the Revolutionary Marxist Group in 1971.

He remained with the RMG when it changed its name to the Movement for a Socialist Republic in 1976. He also was involved in the Bottom Dog publication around the same time and supported a candidate under that name in the 1977 General Election. He joined the Socialist Labour Party and was a member of the Republican Socialist Tendency within that party. Later he was a founding member of Limerick H-Block/Armagh Committee.

And there’s an obituary by O’Connor Lysaght which notes:

The writer has good memories of Pat: the political discussions in the kitchen of his flat In Rathbane, his encouragement when the writer wondered if his account of the Soviet was not better than Kemmy’s (Don’t be silly!’ He would walk the walk by publishing the paper as a pamphlet), Pat’s fiftieth birthday party when all sections of Limerick’s left came to celebrate his life. His second marriage when he presented the writer’s wife with the cake to celebrate her simultaneous birthday. Less happily, there were the times when Pat turned up at Limerick station to greet the writer only to find that he had taken a different train to the one expected. Finally there was the last meeting at the premier of the Limerick Soviet DVD on Mayday last. Despite failing health he behaved with his usual ironic. The said DVD leaves its viewers with him giving the penultimate analysis of the event, as is only proper.

A very fine overview of a life of left activism.