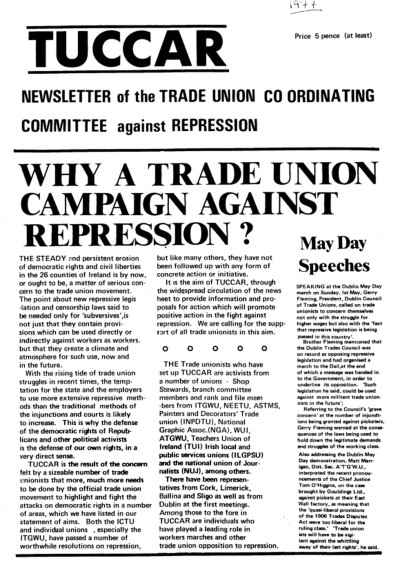 Many thanks to Alan Mac Simoin for writing the following and scanning the accompanying document. This is on foot of the advert for TUCAR in the Socialist Worker Review posted in the Left Archive a number of weeks back.

The attached bulletin is from the Trade Union Coordinating Committee Against Repression. This grouping, which soon changed its name to the less cumbersome Trade Union Campaign Against Repression, was set up in 1977 by a mixture of left republican and socialist trade unionists concerned about the growing use of the courts in industrial disputes and the increasing curtailment of civil liberties on both sides of the border.

Among those involved were Christina Carney and Phil Flynn, both of whom were officials of the Local Government & Public Service Union (which became the main component of IMPACT). Flynn was later better known as a vice-president of Sinn Fein, and later again as the Irish face of Royal Bank of Scotland and alleged money launderer for the Provos.

While most members were republicans or leftists with varying degrees of sympathy for republicanism, not all fitted this description. At one conference in Belfast about seven or eight members voted against a motion supporting “self-determination for the Irish people”. Their argument was that the “Irish people” in that context implied a cross-class nationalist interest, and they were only concerned with what was good for working class people.

TUCCAR’s biggest success was undoubtably in May 1977, when they called a strike in Belfast in protest at the death of AUEW shop steward Brian Maguire at the hands of the RUC in Castlereagh barracks. About 2,000 came out, from jobs like the Royal Victoria Hospital and the Kennedy Way industrial estate. All the strikes were in nationalist West Belfast, though I do know that some large jobs in East Belfast were leafleted by a couple of younger members. And that was a very courageous thing to do at the time.

In the South much activity was based around getting the issues discussed and motions passed in the unions. There was also support for the Liffey Dockyard workers, who were in court after occupying their job and raising the Starry Plough during a 1978 strike over blacklisting.

See Trade Union Campaign Against Repression in the archive