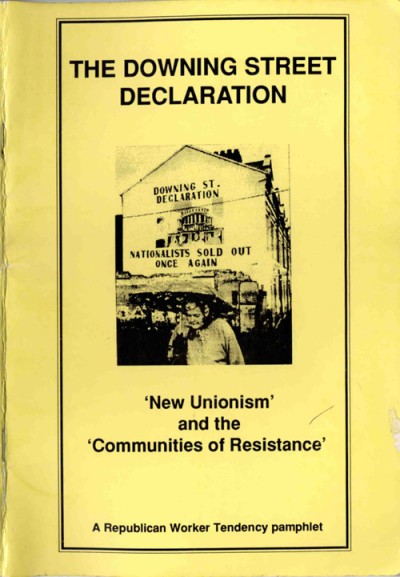 This is a group for which there is relatively little information available. This leaflet issued in the name of the Republican Worker Tendency is dated 26/4/1994. The only mentions of the RWT on the internet is a group which under the Revolutionary Democratic Group left the UK SWP. It later changed its name to the RWT after an internal cleavage and focused on Edinburgh embracing ‘left nationalism’. It appears to have been active in the late 1990s and even more recently (worth mentioning thatthere was also a Republican Workers’ Tendency associated with the Socialist Labour Party in the late 1970s in Ireland). Certainly the overall thesis of the leaflet and the address on the back cover indicates that it is indeed from the Edinburgh formation, and any more information would be very welcome.

The document posits that the Downing Street Declaration is part of a continuing process by the British government to prevent the break-up of the United Kingdom and that part of this is to rebuild the Unionist state. This they regard as having the potential to generate linkages with loyalists, whose only choice in a context where London and Dublin are working together is to ‘go … It alone with a fascist, further slimmed down, ‘ethnically’ exclusive ‘Ulster’ for Protestants only.

It argues that due to the ‘prominent role played by British and Irish C.P. Members in the formation of the Officials… The early Provisionals had quite a Right populist programme’. However it also argues that a mid period saw the ‘C.P.’s theory of national liberation [win] a new convert … When SF backed the ‘stalinist’ Polish government against Soildarnosc’. And eventually it argues that ‘since the collapse of the Eastern bloc, the stage of ‘socialism’ has been dropped, even on paper, by all those adhering to ‘popular front’ politics.

It is cynical about the prospect for armed struggle, except when ‘the revolutionary potential of the national question… Is linked with social demands’. And… ‘the alternative of retreating solely to the early Provisional strategy of the ‘bomb’ and the bullet’, will most likely lead to the same defeats as before.

It is equally cycnical about the “Brit left”, whether of Labour, or further left, variety. Indeed it has harsh words for those ‘groups [which] offer “unconditional support” for the Republican Movement. The Revolutionary Communist Group and the C.P.G.B. - Marxist-Leninist are the best examples’. And tellingly it continues ‘Their focusing on the Republican leadership rather than the wider republican ‘communities of resistance’ is a product of the marginalisation of the ‘Brit left’.

It also references ‘the counter-revolutionary role of the ‘Brit Left’s Irish supporters’ who it sees as outriders for British Unionism.

‘The role the S.W.M. Is playing over Ireland mirrors the S.W.P. Role ‘on the mainland’. Here they have become ‘outriders for the trade union leaders and Labour Party, trying to ‘round up’ and return to the fold, any workers who are contemplating independent action’.

All this leads the RWT to argue that ‘this [is] an opportunity to unite the working class of all the constituent nations from below. If the working class does not take the lead in the break-up of the U.K. State, others will. The consequences of leaving to nationalists to take the lead in the break-up of bureaucratic multi-nation states can be seen in the ex-U.S.S.R. And ex-Yugoslavia.’

A box at the end notes that the political programme of the RWT is available. If anyone has one and could send a copy to the Archive it would be very much appreciated.

The Republican Workers Tendency was formed in the 1990s by former members for the UK based Revolutionary Democratic Group, itself formed from ex-members of the UK SWP. Later members the RWT became a part of the Republican Communist Network as part of the Scottish Socialist Party.…