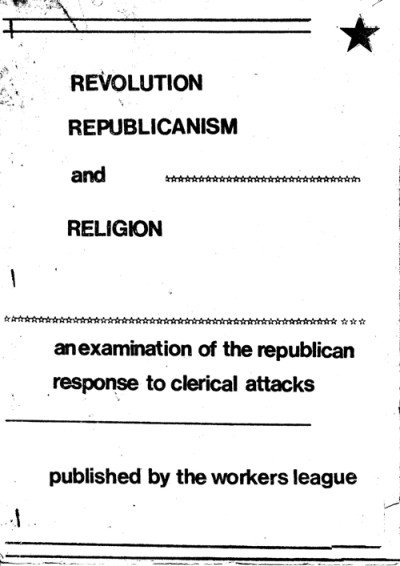 The Workers League has been dealt with in a posting here in the Irish Online Left History project. Suffice it to say that it originated in the Trotskyist ‘League for a Workers Republic’ which split into groups, some supporting the Socialist Labour League in the UK and others the Internationalist Communist Organisation in France. A small group broke away from support for the ICO and reformed themselves as League for a Workers Vanguard and two years later as the Workers League. They were allies of Gerry Healy’s Socialist Labour League.

Some interesting personalities were members of the Workers League including Jack O’Connor but while active on occasion it finally disintegrated around 1978.

This document, Revolution, Republicanism and Religion: An examination of the republic response to clerical attacks is eighteen pages long.

The revolution is at the cross-roads. Matters are not the same as they were two years ago.

On the one hand - emergency powers in the 26 counties, police riots on the streets, fascist thuggery in the prisons, the whole country an armed camp.

On the other hand - huge street mobilizations by the Republican movement, thousands of working class youth attracted to the Provisionals, a clear turn to the left in the anti-imperialist struggle in the North.

It is particularly exercised by attacks on capitalists.

John Hume, the SDLP, the Stickies, the opium pedlars of the ‘Peace’ Movement, all have come out against the Provisional IRA’s campaign against capitalists in the six counties. As expected. So too did Father Denis Faul of Dungannon. The PIRA attacks on individual capitalists greatly alarmed all the enemies of the revolution.

The Workers League does not support attacks on individual capitalists because this method does not get rid of the capitalist class. Our method is the method of the October Revolution, the mobilization o f the working class as a class against the bourgeoisie and its agents.

…we welcome Peter Dowling’s call in Republican News for ‘a battle of ideas amongst progressive forces’. We show in this pamphlet that the conception of socialism in Republican News is an illusion because it is based on a false theory that Christianity is in agreement with the socialist revolution. We show that Christianity (including Catholicism) is the ideological weapon of the capitalist class. How can the proletariat overthrow class rule when it fights class rule with the ideas of class rule?

And there follows an essay which counterposes what it believes to be the conservative and reactionary aspects of Christianity as against revolutionary socialism, utilising by way of example, the statements and approach of Father Denis Faul.

In sum a document that gives a clear insight into the position of the Workers League during this period.

See Workers' League in the archive