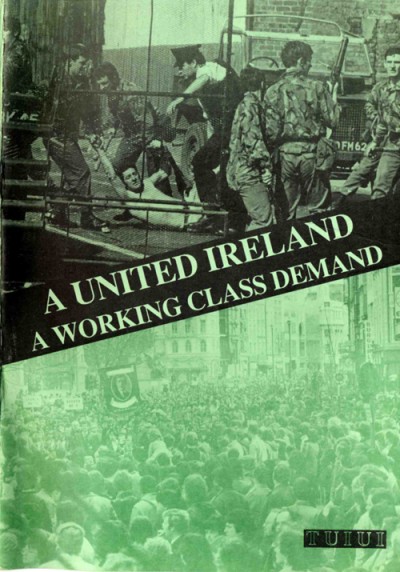 Here is a document from Trade Unionists for Irish Unity and Independence, printed in October 1986. TUIUI was an organisation, that as noted in the Introduction, was set up in 1984 in Dublin. It was ‘not a political party… On the contrary the sponsors of TUIUI are members of different political parties and organisations, or of none. They would probably all describe themselves as socialists, using the term in the broadest sense, who share a common view on the national question and partition, in particular.’

And as the document continues…

What is this view? It is the classical one, advanced by James Connolly, the great Irish labour leader and theoretician. Connolly argued that the two central issues in Ireland, national independence and the emancipation of the working class were complementary, rather than antagonistic. Accordingly, achieving national independence in Ireland was a prerequisite to the ultimate goal of a Workers’ Republic.

As also noted the document was directed towards a British audience, ‘as the interest in Ireland within the British trade union and labour movement has increased in recent years and there is a need for them to hear an authentic Irish trade union voice’.

A list of individual sponsors gives some indication of the support base for TUIUI, Des Bonass (ATGWU), Phil Flynn (LGPSU), Anne Speed (ITGWU), Matt Merrigan (ATGWU and President of ICTU) and so on.

In terms of policy approaches the TUIUI links to the McBride Principles as well as arguing that:

The British Government must be pressed to disengage from Ireland. The British Labour Party must be committed to unconditional support for a united Ireland. It must drop the undemocratic ‘unity by consent’ position. This necessitate an increase in the educational campaign i the British trade union and Labour Movement. … There should be further support for the existing organisations, such as the Labour Committee on Ireland, the Connolly Association, the Campaign to End Interference in Irish Affairs and others who are trying to stimulate debate on the question.

All told another useful addition to the Archive.

TUIUI was set up in 1984 in Dublin by a number of Republican oriented trade unionists including Phil Flynn, Anne Speed, Matt Merrigan.…

See Trade Unionists for Irish Unity and Independence in the archive