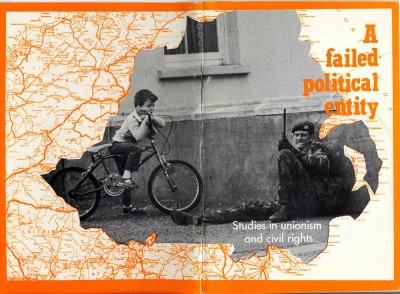 I’m indebted to Jim Monaghan for forwarding this to the Archive, and at precisely the right time too. This is definitely turning into history week on the CLR, and why not. Anyhow, to some extent this doesn’t really belong in the Left Archive, since this is a document that could be argued emanates from traditional Irish nationalism. Consequently I’m posting it out of the usual sequence.

However, as an insight into how the events of 1968 and 1969 resonated long afterward in Irish political life, and for the particular analysis of the events of those years, it provides some use.

Printed in the late 1980s it draws together an eclectic mix of figures, from former Fianna Fáil Minister Kevin Boland, clearly the prime mover behind it, Vincent MacDowell, a former Vice-Chairperson of the Northern Ireland Civil Rights Association in 1969 and others. Even the then indefatigable Ulick O’Connor makes an appearance, and there’s a snippet from Charles Haughey on p.39, but there’s little reason to get overly excited by that, it is just a snippet.

In other words this is a Fianna Fáil, or more precisely a dissident Fianna Fáil (to coin a phrase), production. Perhaps the piece of most relevance is that by Vincent MacDowell, A Failed Political Entity. It is fascinating as much for what it ignores as what it includes. Indeed I find the way it draws a line between civil rights and then nationalism/Republicanism with no clear left element to be hugely instructive. Anyway, that’s just my first impression.

Interesting to know peoples thoughts on this.

The Dublin '68 Committee was formed in the 1980s by a number of individuals including former Fianna Fáil Minister Kevin Boland, Vincent MacDowell, former Vice-Chairperson fo the Northern Ireland Civil Rights Association and others.…

See Dublin '68 Committee in the archive