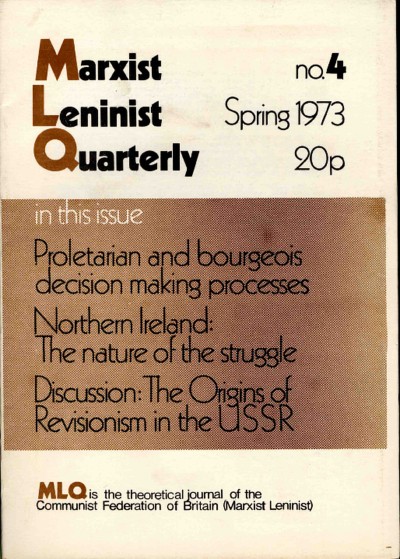 Apologies for the poor quality of some of the scanned pages – this was due to the original print of the document.

The Communist Federation of Britain (Marxist-Leninist) is a new addition to the Archive. The Federation was part of a split from the CP-GB in 1969, a split that oriented towards Maoism. In 1977 the group renamed itself on foot of a merger with smaller organisations as the Revolutionary Communist League. This persisted until 1998 when it was wound up. During that period it moved from a strong identification with the Peoples Republic of China and the Communist Party of China to a position that was critical towards the latter, particularly in the wake of the events in Tiananmen Square in 1989.

This document from Spring 1973 is part of their quarterly theoretical journal in which is contained an essay on Northern Ireland: The Nature of the Struggle. In the essay an argument is made that socialism rather than nationalism is the key struggle in the North. It concludes:

The present tactics necessary for struggle in NI in then present complex situation can only be decided int he light of the experience of comrades working there and have not been examined in this article. But the general line of strategy can definitely be spelled out. While combatting sectarianism and suppression of the democratic rights of the Catholics, we need an organisation that will basically lead the working class of NI in the struggle for socialism. Together with the working class in the rest of the United Kingdom they must bring about the overthrow of the bourgeoisie throughout the entire British state.

The Marxist Leninist Quarterly is not fully devoted to the situation in Ireland, including articles on Proletarian and bourgeois decision making processes and the Origins of Revisionism in the USSR (apologies for the poor quality of some of the scans, a result of the quality of the original), but it does have a twelve page piece on Northern Ireland: the Nature of the struggle.

As the editorial notes:

[this article] is the outcome of a long period of study on the Irish question in the London CFB. Written for MLQ by a comrade in London, it does not represent CFB policy on Ireland. We intend to open discussion of the subject in MLQ and we hope to publish another article in the next issue.

Intriguingly the article references the British and Irish Communist Organisation, saying that ‘It may be necessary to say that although in certain points it is similar to the line put forward by the BICO it differs in other respects’.

It argues that ‘at its bluntest the nationalist line on NI declares that the million protestants of Ulster (who have claimed for 50 years to be British and part of the British state) have got themselves into the wrong nation and must be persuaded to change their minds. This line does not stand up to examination either in practice or in theory. The enormous practical problems of telling a million people that they are not what they themselves believe themselves to be are inescapable to any corrode doing the hard job of carrying on the struggle in NI at this moment, and much confusion would be removed from the debate at once merely by studying seriously the stark practicalities of this question.

That said the document notes in footnotes ‘the errors that B&ICO make’ including ‘not recognising the progressive nature of the historical Irish nationalist struggle as being a just struggle against oppression and one that also significantly weakened the British imperialist ruling class close to its heartland… they do not actively support the present struggle of the Catholic minority in NI against oppression… by their presentation of the situation in NI, in which they reserve most o their criticism for the Catholic bourgeois and make little or no criticism of the Protestant bourgeosie, they actually fan protestant chauvinism… they deny that the NI bourgeoisie intensified divisions on religious lines among working class people for its own purposes’.

If anyone knows whether there was an article on Ireland in any subsequent editions of MLQ or have a copy of it we would be very grateful if this could be forwarded to us.

The Communist Federation of Britain (Marxist-Leninist) was a Maoist party formed in 1968 by former members of the Communist Party of Great Britain. In 1977 it became the Revolutionary Communist League, after merging with other small groups.…

See Communist Federation of Britain (Marxist-Leninist) in the archive