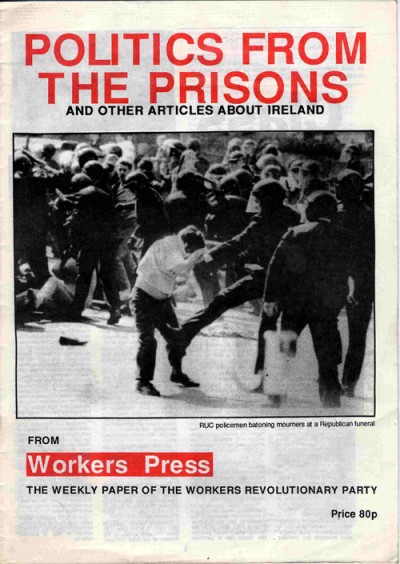 An interesting document from the UK based Workers’ Revolutionary Party - and typical of a category of pamphlet published by UK left organisations on Ireland that the Archive will be uploading many more of in the course of the year. This takes a strongly pro-Sinn Féin and IRA viewpoint and seeks, through articles such as “Class Struggle and national struggle”, to position it within a Marxist framework.

The Workers Revolutionary Party , founded by Gerry Healy, has to be one of the most interesting British Trotskyist groupings with a remarkably contentious history. Let’s just say that by the time this document was published that history had brought it to a point where there were two competing versions of the WRP, the WRP (Newsline) which remained centred on Healy and the WRP (Workers Press), the latter being the originator of this document.

Anyhow, whatever its provenance, the introductory piece lauds:

Questions of History written by Irish Republican Prisoners of War and published by the Sinn Féin Education Department… [as] an exceptional book. If previously we thought of self-sacrifice and defiant courage as the prisoners great strengths, now we must add another: they are making a vital contribution to political discussion.

This seeks to set the book within a clearly ideological framework, which is much to the liking of the WRP.

Trotskyism and nationalism are dealt with in an article that notes that Trotsky himself ‘criticised the [1916] Rising’ and continues that ‘Subsequently Trotskyists today play down the importance of the question of national liberation of the working class’. It continues to bring these seeming contradictions with the stance of the WRP to a conclusion which for good measure notes that…

At the same time Stalinist parties - be it the British CP or Communist Campaign Group, or the CP of Ireland - are condemning of ‘terrorism’ ever more loudly. On the present anti-IRA witch hunt - where the issue of defending national struggles comes up concretely - they are with imperialism. As for the Stalinist Workers’ Party, they have long ago accepted partition lock, stock and barrel. It is these people, not Trotskyists who turn their backs on Ireland’s right to self-determination.

Indeed this approach is carried into other pieces, such as “Stand firm against anti-IRA witch-hunt”, written in the aftermath of the Enniskillen bombing which notes that “First off the mark to denounce the IRA, before any of the details were known, was the Soviet news agency, TASS”. Although this isn’t restricted to “Stalinists”… “The “Militant” tendency stands for a similar ‘unity’ - within the confines of the six-county state created by British imperialism, and at the expense of any principled defence of those in military conflict with that state.”

And the central line is expressed as follows:

Revolutionaries must support all struggles taken up by all sections of the working class in pursuit of their class interests. But if backward sections of the protestant working class are drawn in behind the loyalist pogroms against catholics, we must support those who physically oppose them. (In other words, if a protestant worker on a picket line attacks a policeman in the course of picketing, we support him; if a protestant worker attacks the same policeman because he is resisting a loyalist pogrom in the name of bourgeois justice and the Anglo-Irish Agreement, we support catholic workers’ right to defend themselves, and ridicule any illusions that there is anything spontaneously “progressive” about the attack on the policeman).

There’s considerably more to this document than that, but it gives a flavour of it and a sense of the analysis used.