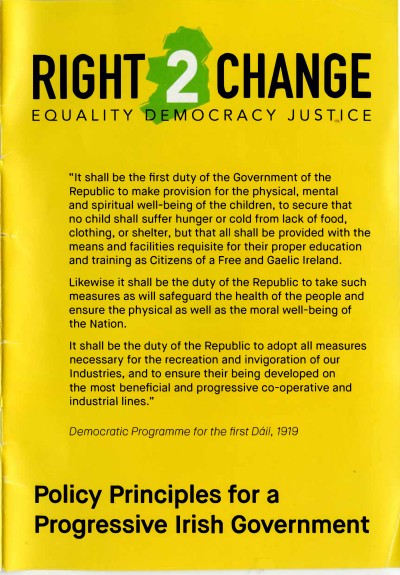 This is an important document since it links into both electoral politics and attempts to forge a broad consensus amongst formations on the left. As such it is useful to ensure that it is in the Archive. As noted here on wikipedia.

Right2Change is a political campaign that arose from the Right2Water campaign in Ireland, built around a document called “Policy Principles for a Progressive Irish Government”.[1] The principles centre on areas like health, housing, jobs education and dealing with debt.

The document itself quotes the Democratic Programme for the first Dáil from 1919.

“It shall be the first duty of the Government of the Republic to make provision for the physical, mental and spiritual well-being of the children, to secure that no child shall suffer hunger or cold from lack of food, clothing, or shelter, but that all shall be provided with the means and facilities requisite for their proper education and training as Citizens of a Free and Gaelic Ireland. Likewise it shall be the duty of the Republic to take such measures as will safeguard the health of the people and ensure the physical as well as the moral well-being of the Nation. It shall be the duty of the Republic to adopt all measures necessary for the recreation and invigoration of our Industries, and to ensure their being developed on the most beneficial and progressive co-operative and industrial lines.” Democratic Programme for the first Dail, 1919

This document is the outcome of an extensive consultation process between individuals, community groups, trade unionists. political parties and independent representatives – all of whom have been involved in the anti-water charges movement. Approximately 150 detailed submissions were received and two separate conferences of 200 activists made amendments to the policies identified.

The purpose of this process is to help facilitate a new type of politics which will deliver a fairer Ireland for all. One that is based on the principles of democracy, equality and social justice. We have identified ten basic policy principles which we believe should be the minimum obligation for any progressive Irish government. The right to water, decent work, housing, health, debt justice, education, democratic reform, equality, a sustainable environment and national resources, are a priority for the people of Ireland.

The Right2Water Trade Unions have published a fiscal framework document which would allow for more than €9 billion in spending over four years. This increased spending would not only improve our public infrastructure, but would help to create a fairer, more equal society with greater investment in jobs as well as our health, education and housing systems which are consistently starved of resources. More information on this fiscal framework is available at http://www.right2change.ie or http://www.right2water.ie

Right2Change is a poltiical campaign centered around a set of policies outlined in “Policy Principles for a Progressive Irish Government”. It developed from the Right2Water campaign.…

See Right2Change in the archive