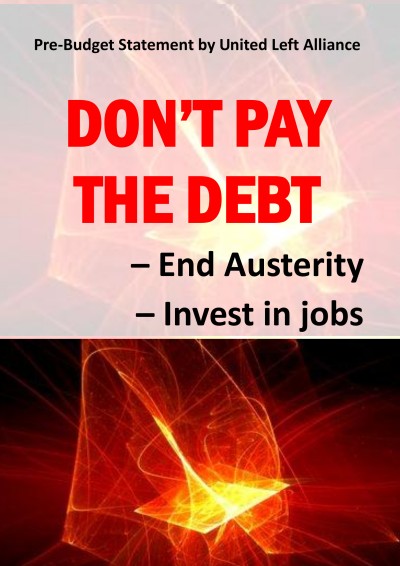 Many thanks to Alan Kinsella of Irish Election Literature for this document.

This statement, issued by the United Left Alliance in 2013 has a broad scope, seeking to critique previous budgets by successive governments of the state and offer an alternative. It covers areas such as the ‘debt’, the USC, a wealth tax and a Financial Transactions Tax in various sections.

The ULA proposes a socialist alternative to the budget proposals of the government and the other parties in the Dáil. We say that those who are responsible for the crisis should pay for it, not those who are the social and economic victims – the ordinary working people of Ireland.

We propose to take the burden of the crisis off working people, improve their lives and revive the Irish economy. This can only be done by taking the decision-making of the banks and finance houses out of the hands of management whose only goal is profit; and embarking on a major public investment program. If the current investment rate of 10% of GDP (EU average is 18.5%) continues, Ireland will become an economic backwater with impoverishment for generations and run down public services. Only a reversal of current policies can stop that.

As part of democratic public control of the banks, mortgages should be written down. There should be increased lending to domestic small business. The state however, must invest in public infrastructure including schools, hospitals, water, public transport, energy and state-built housing. The privatisation of state-owned enterprises and utilities must stop; our natural resources must be nationalised and the public service cuts of recent years reversed.

The document is 34 pages long and it concludes:

In putting forward these proposals, the ULA is attempting to show that contrary to the repeated claims of government, the ‘Troika’ and economic “experts” the resources do exist to provide an alternative to the policies of austerity, cut-backs and privatisation.

However, such alternative policies cannot be implemented and will not be successful without a radical challenge by the people of this country and the people’s of Europe to an economic system that prioritises profit over people.

In offering these alternative economic proposals, the ULA pledges itself to expend every effort to play its part in building a Europe-wide and international movement of workers, the unemployed, young people and pensioners to challenge the failed doctrine of austerity and private profit. 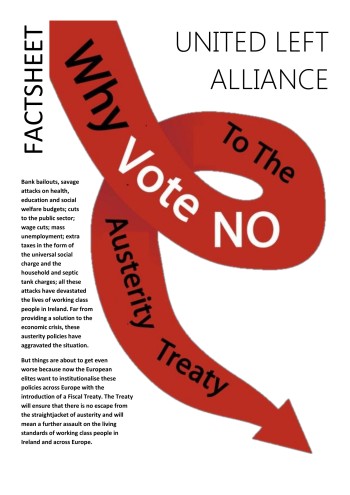 Factsheet: Why Vote No to the Austerity Treaty (2012) 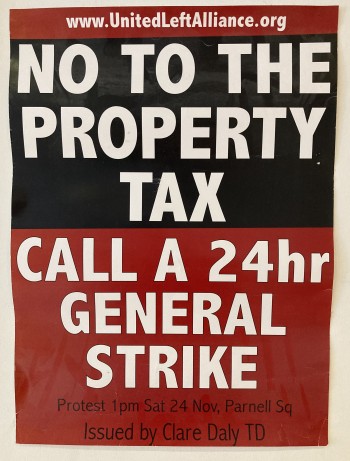 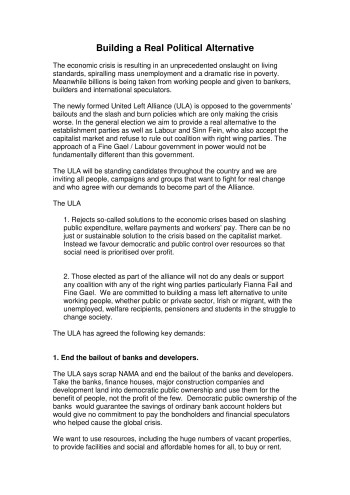 United Left Alliance in the archive

The United Left Alliance was a loose electoral grouping of a number of left political parties and independents which contested the 2011 General Election. Its constituent elements included the Socialist Party, People Before Profit and the Workers and Unemployed Action Group. Five candidates were elec…