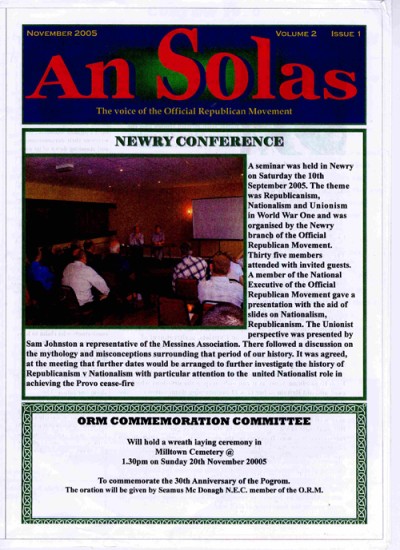 A useful document donated to the Archive offers an opportunity to consider the most recent off-shoot of the Official Sinn Féin, later Workers’ Party, brand of socialist Republicanism.

Look up Official Republican Movement on, say, wikipedia, and the most one will read is:

In the late 1990s, some Northern based former Official IRA members launched a “re-founded” Official Republican Movement, intended to pursue the socialist republican politics which the Officials espoused in the 1970s. They are not thought to advocate the use of violence however.

The history is a little more complex than that reading (and there is another document donated to the Archive which I intend to post up as soon as a guest writer finishes a piece on it).

What is interesting about this document is that it supports the contention that the ORM was mainly centred on Newry and it demonstrates a strongly retrospective tilt to that organisation. The address for the ORM is the same as An Eochair, an ex-OIRA prisoners support group. Note the Seminar organised by the ORM on Republicanism, Nationalism and Unionism which included speakers from both Republican and Unionist traditions.

The concerns of the ORM are certainly within the range of traditional socialist Republicanism. There is a good report on the Grundtvig European Women’s Project where An Eochair was also involved in a visit of the former to Belfast. Also notable is a piece on a Cross Community conference with a mention of the Sinn Féin Mayor of Derry where - remarkably - the Mayor gave a commemorative plaque of the Conference to an An Eochair member.

The editorial on the inside page on decommissioning by the IRA, while hardly fulsome, is at least positive in tone. A review of DVD on the Falls Curfew of 1970 is much more pointed, directly blaming SF for what it sees as a propagandistic attempt to rewrite history to their benefit.

However most significant is an analysis which reflects upon the Official IRA and its development. Note the reference to ‘people evolved from the Workers’ Party to form the ORM, an organisation not afraid to admit its mistakes and successes and defend the name of the O.I.R.A.’

This, perhaps, explains the dynamic of the ORM, an intriguing mixture of civil society social activism with a strong sense of an historical continuity with a very specific phase in the life of socialist Republicanism. In some respects the ORM almost appears like an organisation in search of a party structure.

In sum a fascinating document. 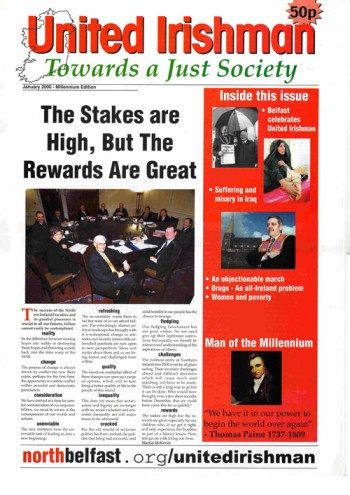 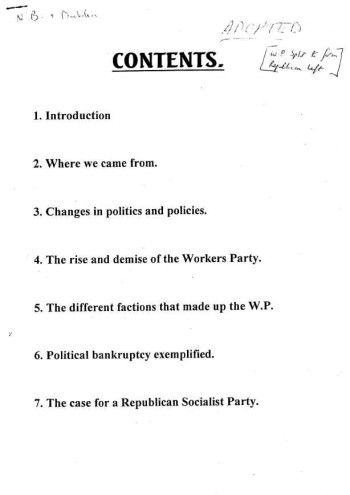 Case for the Formation of a Republican Socialist Party (1999)

See An Solas in the archive