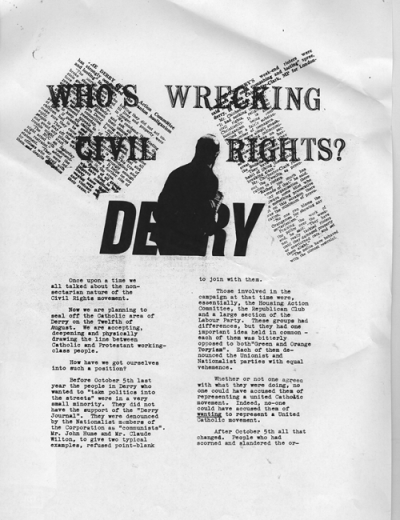 So, here from August 1969 is a leaflet by Eamonn McCann. It stands at a point just before the Battle of the Bogside, and as was noted to me by the person who donated a copy:

..it was notable for its lack of enhusiasm about this prospect, and not at all like the celebratory accounts that you will hear in retrospect. It bears comparison with an interview from New Left Review from 1969 where McCann is again much more worried about where things are going than Mike Farrell and the others.

This person suggested that:

It reflects the divisions within the broad civil rights camp as well and the fact that… Despite attempts to paint it as essentially non-sectarian, the CR movement was essentially a mass Catholic movement once it picked up pace after August 1968 and probably could never have been anything else, because as McCann notes it was based on the unity of ALL Catholics against the state.

That’s certainly an analysis which chimes with the facts on the ground, rather than the aspirations of those who have tended to write up the subsequent histories.

What is also striking is how rapidly, from McCann’s account, ‘politics’ by which we mean our sort of politics was sidelined by the dynamic on the ground. In a passage which will be familiar in its outline of that dynamic to all who have tried to inject leftwing thinking into various contexts he [McCann] notes that:

Any attempts to put forward our own position within the movement is howled down: we are told that we are ‘introducing politics’ etc. In Derry we have finished up participating in the ‘Defence Association’ locking ourselves inside the Catholic area. Probably it is necessary. One must make some attempt to avoid a Catholic versus Protestant fight.

There’s a certain rough honesty about his use of the word ‘probably’.

… A member of the Citizens Action Committee, delivered an impassioned speech in the course of which he said: “I don’t believe they will attack us, because they know that for three-hundred and sixty four days of the year we outnumber them’. That, to my mind, was one of the most nauseating things I have ever hard said on a public platform. But everybody cheered. Everybody seemed to think it was quite a reasonable thing to say.

It’s a protean force, nationalism - of whatever hue.

We are likely to hear more of this sort of thing. We will hear more of it because in the coming months socialists should ceaselessly and systematically criticize the conduct of the Civil rights Campaign and make it clear that recent events have in no way deflected us from pursuing our prime objective - that of uniting the Catholic and Protestant working class on a socialist programme. Everything else is secondary to this.

Rud eile, to quote Splintered Sunrise, this somewhat puts Eoghan Harris’s rose tinted view of 1968-1969 (expressed once more in Hot Press recently) and the centrality of the CR campaign into perspective. Because the CR campaign itself represented in microcosm the splits and fissures within Nationalism in Northern Ireland that would subsequently rupture entirely.

The dichotomy between what McCann and others sought to achieve, and what was actually achievable, not to mention what forms all these energies would be channeled into, is crucial to an understanding of the period.