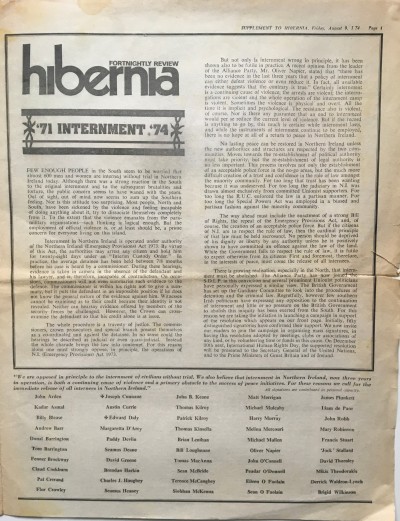 This is a sad but timely addition to the Archive with the recent death of John Mulcahy, publisher of the Phoenix and former editor of Hibernia. Many thanks to the person who forwarded it to the Archive.

A full edition of Hibernia would be very welcome as an addition to the Archive given its campaigning profile in Ireland during this period.

This document on internment was published as supplement by Hibernia magazine in 1974. In eight pages it offers an overview of the genesis of internment in Northern Ireland, the conditions within which internees are held, the ‘experience of internment’, profiles of internees and from Robert Fisk a sense of the British view of the process.

The editorial notes that:

Few enough people in the South seem to be worried the almost 600 men and women are interned without trial in Northern Ireland today. Although there was a strong reaction in the South to the original internment and to the subsequent brutalities and torture, the public concern seems to have waned with the years. Out of sight, out offend now seems to sum up the Southern feeling.

And it notes that this is unsurprising given ‘the violence and feeling incapable of doing anything it… to the extent that violence emanates from the paramilitary organisations – such thinking is logical enough. But the employment of official violence is, or all least should be, a prime concern for everyone living on this island’.

It calls for the abolition of internment and for readers to ‘join the campaign’ against it.

See Hibernia in the archive