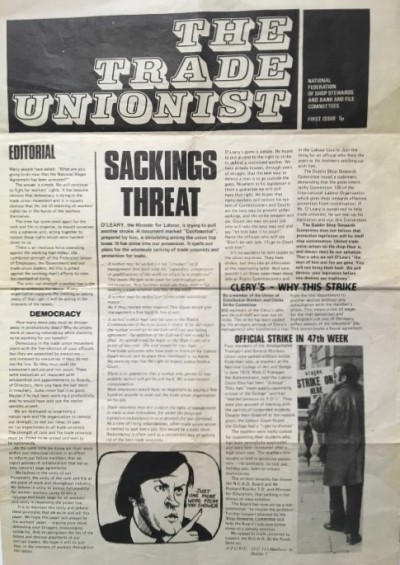 This is a fascinating document. THe NFSSRFC is mentioned here in a piece by Alan Mac Simoin and any further information would be very much appreciated. As a four page tabloid this is a comprehensive and well produced document. As Mac Simoin notes :

There is nothing new in the idea that ordinary trade unionists need to come together to look after our own interests, and the interests of the unemployed and the poor. It was done back in the 1970s to oppose the no-strike National Wage Agreements (forerunners of Partnership 2000). After the NWA was voted in the activists did not shut up shop and go home.

In the editorial it noted:

Many people have asked “what are you are going to do now that the National Wage Agreement has been accepted?

The answer is simple. We will continue to fight for workers’ rights. It has become obvious that democracy is dying in the trade union movement and it is equally obvious that the job of restoring all workers’ rights lies in the hands of the workers themselves.

The time has come once again for the rank and file to organise, to mould ourselves into a cohesive unit, acting together to restore those rights which were handed down to us. There is an insidious force which is operating against the workers today: the combined strength of the Federated Union of Employers (now called IBEC), the Government and our trade union leaders. All of this is pitted against workers’ efforts to raise our standard of living.

The only real strength a worker has is the right to withdraw labour. If any organisation supports the limiting or taking away of that right it will be acting in the interests of the bosses.”

The demands were straightforward:

What is evident is just how much activity there was. Strikes in Clery‚and the NCAD, Dublin Corporation and scores of other workplaces are mentioned and reported on.

What is also notable is a report on the first meeting of the Committee of the organisation where the conditions of membership were laid out.

National Federation of Shop Stewards and Rank and File Committees

The National Federation of Shop Stewards and Rank and File Committees was formed in the early 1970s to continue opposition to the National Wage Agreement in the Trade Union movement after it was accepted.…

See The Trade Unionist in the archive