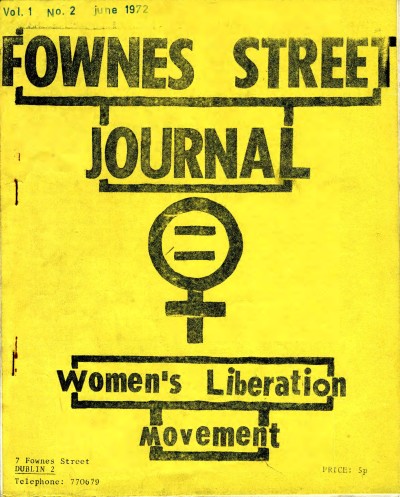 Many thanks to Jim Monaghan for forwarding this document.

This is a notable addition to the Archive. The Fownes Street Journal published in 1972 was produced by one of the Women’s Liberation groups that were established after the breakup of the Irish Women’s Liberation Movement which had been extant in the early 1970s for a number of years. It appears to have been a consciously non-party political grouping which espoused non-violence. It succeeded in printing at least two issues of the Fownes Street Journal.

The first article suggests why readers should join Women’s Liberation arguing that:

…it [means] that if it is a successful movement you should be able to follow any career (including motherhood) for which you have the ability with no more of the setbacks than those common to the human race. This means, of course that you should be able to receive the education suited to your talents – not just something thought suitable for the generalised woman.

It should mean that you will have equal rights and responsibilities running a house and family, and that if you are unfortunate to end up in a criminal court, there will be at least 6 women on the jury. It should mean that planning your family is a matter for individual conscience and the teachings of your chosen religion rather than a matter for Government control.

It should mean that the care of the children falls equally on men and women and that the consequence of desertion, being the parent of an illegitimate child or sling a partner through death, depend on the misfortune, rather than the sex of the victim.

It should mean that society will be neither male dominated as it is at present, or female-dominated as some fear it will be if Women’s Liberation is successful.

It should mean that working conditions, salaries etc depend not he job and not on the sex of the worker.

In addition to many snippets of information detailing discrimination there are pieces on Women and Nonviolence which explicitly argues for a non-violent approach in campaigning for women’s liberation, a letters page which includes a communication from an Asst. Librarian which details the marriage ban and how the writer is forced to resign on marriage. As the letter points out, this is ‘a perfect waste’ given her education, her experience and research.

There’s a (at this remove) remarkable account of Career Information Leaflets from the Dept. of Labour which while comprehensive ‘ at the same time limiting in that after each pamphlet listed there is a designation as to which sex has been deemed suitable for this particular occupation’.

And on the last page there’s an account of how the first woman to sit on a coroner’s Jury had done so recently thereby breaking ‘an eight century long tradition’. It goes on to note that the situation in criminal cases was (then) somewhat different ‘because women make up such a small percentage of property owners it is not considered worthwhile to include them automatically on lists of jurors. A women who is eligible for jury service and who considers it her duty as a citizen must apply to the city sheriff to be included not he list of jurors. Here is where the system breaks down in a CATCH 22 stalemate: The occasional woman who appears on a jury is generally objected to on the grounds that volunteering indicated a dangerous tendency and who but a crank would do so’.

Any further information on the Fownes Street Journal and this particular time in respect to feminist and women’s liberation activism and links to materials outlining same would be very much appreciated.