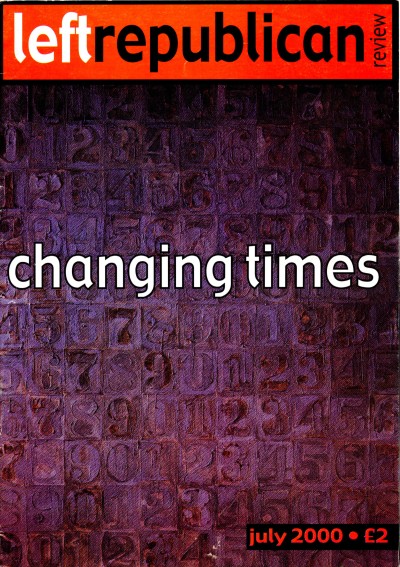 A range of documents were donated to the Archive from a number of groups and organisations from the 2000-2002 period. We’ll be posting them up over the Autumn in order to get a sense of the specific concerns during that period, now a good decade and a half ago. This is the first.

This publication, of which this is the first edition, edited by Eoin O’Broin, states:

The editorial continues in this vein, arguing that:

As we go to press the conflict resolution process in Ireland continues at a slow but steady pace. Despite recent crises, Unionists have re-entered the power sharing political institutions and the British government has made a start to its process of demilitarisation. While neither of these issue has been fully resolved there is at least some momentum. Not so, however, on the question of policing. Unionist and securocrat pressure has prevented any progress on this front. Whatever the outcome of the present debate on the British government’s policing bill, nothing short of the disbandment of the RUC will provide the new beginning to policing demanded by nationalists and other progressive forces across Ireland.

The contents is varied, with a piece by O’Broin on whether ‘republicanism is adapting to suit the changing times’. Ruth Tallion examines the ‘question of Women and the Equality Agenda’. Robbie McVeigh interrogates the Equality Agenda and the Peace Process. There’s a report on ‘Building the Basque Country’ in interviews with a range of figures involved in Basque politics. There’s also a roundup of books on Palestine.

Notable is how many of the contributions effectively take essay form. This clearly wasn’t intended to be a straightforward magazine.

Left Republican Review was in independent journal which began publishing in 2000. It was edited by Eoin O’Broin.…