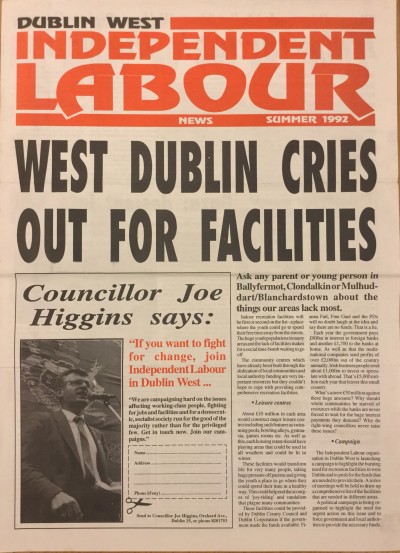 This newspaper from Independent Labour, the formation that had formerly been Militant Labour and would later become the Socialist Party, is a well produced four page large format publication.

On the front cover it notes ‘Councillor Joe Higgins says: “if you want to fight for change, join Independent Labour in Dublin West…we are campaigning hard on the issues affecting working-class people, fighting for jobs and facilities and for a democratic, socialist society run for the good of the majority rather than for the privileged few. Get in touch now. Join our campaigns’.

The focus of the newspaper is strongly on the local. The cover story is headlined ‘West Dublin Cries Out For Facilities’. Inside there is a piece on high unemployment in Blanchardstown and Clondalkin. However there are also pieces on other topics including one on Gaza and a recent visit there from Joe Higgins.

A very comprehensive Council Report outlines Joe Higgins work on that body since his election the previous June. There is also a piece on how Higgins is ‘to stand in the general election’. The piece details his previous membership of the Labour Party.

Also in the newspaper is an article by Ruth Coppinger and another that outlines what Independent Labour stands for under the heading “Genuine Socialism can solve Crisis”. This notes that:

ILP in Dublin West stands in the tradition of great socialists like James Connolly and Jim Larkin and believe in a genuine socialist society where the working-class majority govern.

This has nothing in common with the Stalinist dictatorships which ruled in the USSR and Eastern Europe from the late 1920s until recently when they were heroically overthrown by revolutions of workers and youth.