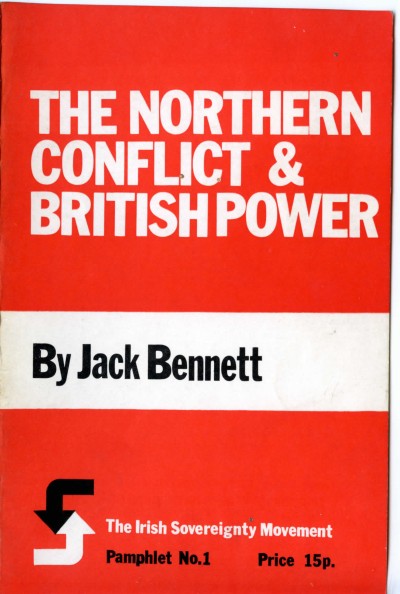 This document from the early 1970s is the first addition to the Archive from the Irish Sovereignty Movement. This body was established by Anthony Coughlan and campaigned on issues relating to EEC membership, neutrality and Northern Ireland. It was succeeded by the National Platform .

The frontispiece notes that:

Jack Bennett is a Belfast journalist who is a regular commentator under various pen-names on northern affairs. He was a foundation member of the Belfast Wolfe Tone Society and of the NICRA.

This pamphlet is based on a lecture he gave to a conference of the Dublin Wolfe Tone Socoiety in Carrickmaacross on November 4, 1972.

The Introduction by Micheál S Ó Loingsigh notes that:

The ISM has pleasure in publishing Jack Bennett’s thought-provoking pamphlet. Only an Ulsterman with a Protestant background could write of British power in Ireland so clearly and so unambiguously.

There is a grave responsibility on all of us on this island, especially the Irish Government and the leaders of both communities in the north, to come to gather and discuss ways of developing a climate in which institutions can be built so as to provide peace with justice in the future.

And he concludes ‘the British government must change its policies and attitude to Ireland’.

It must declare its support for Irish unity and must take steps to cease its interference in Irish affairs. This action of itself will not bring immediate amity or unity, but it will provide the one and only foundation on which the Irish people, however difficult it may be, can build a future in which political violence will be but an unhappy memory.

Of all the dangerous doctrines being propounded in Ireland today, there are few more dangerous than that propounded by Conor Cruise O’Brien which holds that nothing must be said or done to make things better, lest in doing so we might only make things worse.

The last page of the document outlines the Officers, Objects and Methods of the Irish Sovereignty Movement.

The Irish Sovereignty Movement was a campaign group active in the 1970s and 80s, which campaigned mostly on EEC membership and integration. It was led by Anthony Coughlan. Coughlan and other members later established a similar group called National Platform.…