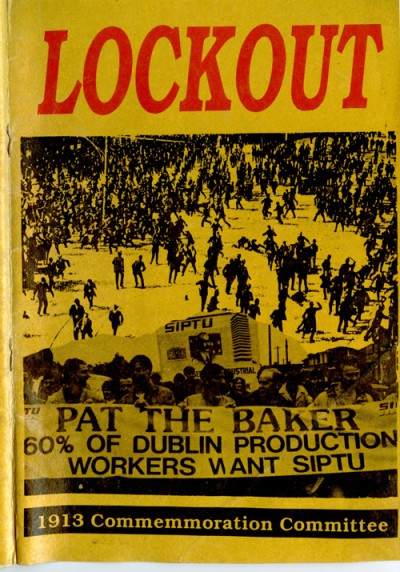 Many thanks to Liam Cullinane for forwarding this document to the Left Archive. Many thanks also to JM for enabling the following introduction to the document by Mags Glennon, who was involved in the 1913 Commemoration Committee in 1993:

The pamphlet ‘Lockout’ was produced in 1993, as part of a series of events to mark the 80th Anniversary of the 1913 Lockout. These included a Public Meeting, Exhibition and historical walking tour. The weekend was put together by the 1913 Commemoration Committee, which included members of Red Action, the WSM and The Workers Party, as well as independent republican and socialist activists and rank and file trade union members. Also involved were striking workers at the time locked out from the Pat The Baker company for joining a trade union. ‘Lockout’ was launched by Dublin Lord Mayor Tomas McGiolla, only a few hundred copies were produced and it sold out very quickly.

A Commemoration Committee to celebrate the centenary of the Lockout has been established by several of the original members of the 80th anniversary committee and a host of new political and historical groups. Our aim is to highlight the current economic hardships of working people and the source of this crisis through comparing and celebrating the heroic efforts of the Dublin people in 1913. We feel that the current union leadership and their political supporters in Labour will attempt to use the 100th anniversary as a diversionary tactic to downplay their ongoing roles in the economic punishment of working families for a crisis not of their making.

This pamphlet contains a range of essays on various topics relating to the Lockout.

A range of familiar names can be found in the pamphlet, Des Derwin writes the essay on Dublin 1913-1993. Cieran Perry (then of Red Action) writes about the Irish Citizen Army. Mags Glennon also of Red Action, writes about ‘Socialism and Irish Nationalism 1830-1913’. Gregor Kerr of the TUI and Secretary of Trade Union Fightback (and the WSM), writes about the Industrial Relations Act (1990). Meanwhile there is a short two page piece under the headline ‘Pat the Baker – 1993 Still fighting for Union Rights’ which deals with a then sixth month strike for union recognition. All told the nature, background and development of the Lockout and its aftermath are considered in some detail and obvious linkages with then contemporary events are made.

However in order to give a sense of the document it is probably most appropriate to briefly consider the Foreword by Brendan Archbold of IDATU. He offers in two pages an outline of how during the 19th century the British had to concede the vote to most male workers and that there would be a further softening of the ‘combination laws’ of 1824 which had only marginally ameliorated the notorious anti-trade union legislation of the 1799 and 1800 which made unions illegal.

However even the Trade Union Act of 1871 was legally contested and as Archbold notes;

In the words of Justice Lindley in 1899, ‘you cannot make a strike effective without doing more than is lawful’.

Four years later the Tory government established a Royal Commission which lead to the introduction of the Trade Disputes Act in 1906 – which as Archbold notes then stood for 84 years as the ‘legal basis for the bulk of industrial action engaged in by Irish workers up to and after the establishment of the Irish Free State’. And Archbold notes that ‘armed with real protection from legal persecution, the trade unions could now concentrate on the struggle for better working conditions instead of concerning themselves with judicial ambush from the bench’. He also notes that so pervasive was union activity that even the Inspector General of the RIC was forced to admit that ‘recent indiscipline’ was a function of trade union picketing (and presumably speeches).

Archbold positions the 1913 Lockout as being something of a response to this upsurge in activity, and in particular a view amongst the employers league that the ITGWU, Larkin, Connolly and other trade unionists as well as their membership ‘would have to be crushed’. And he argues that ‘the battle would not be fought on issues such as wages or working conditions, one would it be fought on the issue of the right to belong to a trade union. The issue which was to cost James Nolan, a young Dublin worker, his life, would be the ‘kind’ of Trade Union a worker could join. Of course workers could join unions but not ‘Larkin’s union’.’

And the piece notes a rhetoric that many would become well acquainted with in the contemporary period:

Today however while the challenge is still there, ti takes a much more sublet approach. From employers we get what is commonly known as ‘Human Resource Management’. It’s not about ‘us’ and ‘them’, we’re all in this together and we must learn to get along without involving outsiders, otherwise known as trade unions. From the trade union leadership we get the Programme for Economic and Social Progress (PESP). Need we say more. And finally from the Government we get the Industrial Relations Act, 1990. A piece of legislation which is designed to curtail the activities of trade unionists and to bring about what government and employers constantly refer to as ‘good industrial relations’.

So the struggle continues. We must fight today, just as energetically as they did in 1913 for the right to join a union and to have that union recognised as the legitimate voice of the workers in question. The significance of the ‘Pat the Baker’ strike will not be lost on those trade unionists who are familiar with the principle involved. So let’s be brave in the struggle. After all, we have the trade union leadership on our side. Haven’t we?

The 1913 Commemoration Committee was a broad group of left and union activists who combined to commemorate the 80th anniversary of the 1913 Lockout.…

See 1913 Commemoration Committee in the archive