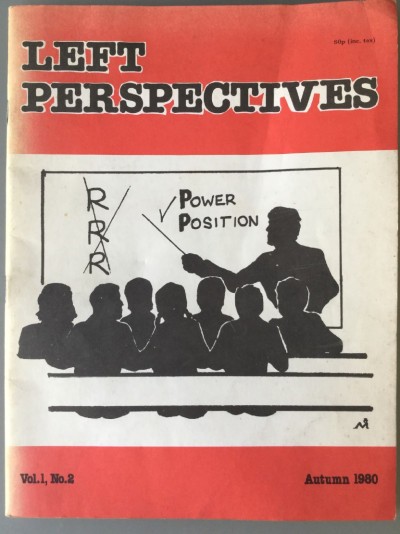 Left Perspectives describes itself as presenting a ‘socialist analysis of political, economic and social problems’. It continues that it has a policy of ‘using non-sexist language’. It seeks articles ‘with a practical emphasis’.

The range of contributors is wide. Dermot Quish, a long-standing socialist activist was a teacher at the time, Madge Davison was secretary of NICRA, Francis Devine was co-Editor of Saothor, Seanie Lambe part of the group of activists around Tony Gregory, Art Kavanagh, a former UCD student activist, Brian Trench needs no introduction, Andrew Boyd a graduate of QUB and one-time apprentice in Harland and Wolff and Chris Kirwan of the ITGWU.

Likewise the articles cover a broad range of topics, ‘Pedagogy and Politics’ by Quish, Inflation and Pay Restraint by Art Kavanagh, a section focusing on Northern Ireland with pieces by Madge Davison and Andrew Boyd and one which includes an overview of the Northern Ireland Association of Socialist Lawyers founded that year.

There are also a number of book reviews.

A small taste of the overall approach can be given by a number of quotations from the Editorial which is on Northern Ireland.

For socialists, NI presents a series of political problems. The province is a development of capitalism, of British imperialism and colonialism, but to state the problem thus is not to point infallibly to its solution.

Colonialism involved the creation of a privileged minority of colonists who are the local embodiment of the colonial power. When the colonial thrust has been reversed, the colonists have either to put up or get out, not least because there are fear of them than there are of the natives. In NI the colonists (and anti-Unionist rhetoric veers uneasily between welcoming them as Irishmen and women under the skin, and threatening to chase them into the sea), actually outnumber the natives. Only in Ireland as a whole do they form the classic political minority. But Ireland as a whole is not the political unit – and attempts to claim that it is must take second place to official insistence, however qualified, on the right of NI’s own political majority to self-determination.

It also notes that

Above [?] all that Dublin and London appear to be agreed that there can be no return to simple majority rule.

The principal options at present, therefore, are direct rule and some form of power-sharing. The critical political question is whether there is any sanction which will force unionist to accept the latter. It could be argued that the North’s anti-unionists have a unique power to defuse the border as an issue Irish politics, in return for acceptance by unionists of power-sharing; if one accepts that Dublin cannot, and London will not, take out by removing it forcibly.

Socialists may have to accept, in the short term, that the quality of their analyses of the Northern situation is not matched by a capacity to influence it; and that even the mergence of a conservative but non-sectarian administration, together with the democratic processes by which it can be opposed and replaced, is preferable to a type of politics which takes place only behind closed doors.

This necessarily commits socialists, whether in NI, Britain or the Republic, to a long march; identifying the ruling groups in society and mobilising political action against them; opposing illegal violence by whomsoever exercised; persuading international socialism that the cliches of terrorism in NI are not the language of the left; and exposing the many and varied ways in which democratic structures can be manipulated.

Any further information on provenance – or other issues – would be very gratefully accepted by the Archive.

Left Perspectives was a magazine published in Dublin in the early 1980s, self-described as presenting a “socialist analysis of political, economic and social problems”.…

See Left Perspectives in the archive