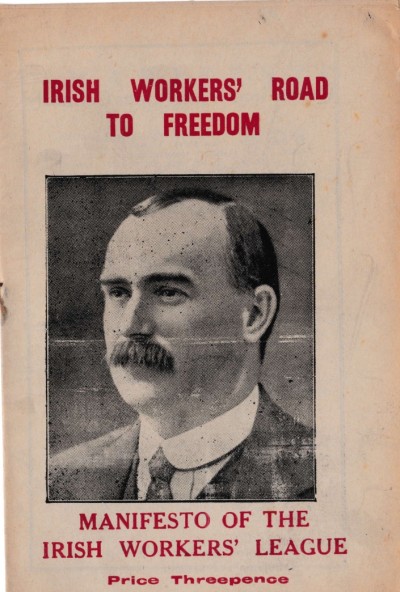 Many thanks to David Convery of the Irish Centre for the Histories of Labour and Class at NUIG for forwarding the scanned version of this document to the Archive. It is an important addition to the collection.

At seven pages of text it is quite short. The first page reprints quotations from James Conolly including:

In the Socialist movement the North and South will again clasp hands, again will it be demonstrated, as in ’98 that the pressure of a common exploitation can make enthusiastic rebels out of a Protestant working class earners champions of civil and religious liberty out of Catholics and out of both a united Social democracy

The main body of the Manifesto is organised in sections that deal with the political situation in Éire, American Imperialism, antagonism to military blocs, the Aims of the IWL and a call to workers to unite.

It notes in the introductory words that:

In the world today the common people everywhere are in revolt against imperialism, fighting for the right of self-determination and for the abolition of social injustice and inequality. Everywhere the rule of the imperialists is challenged by the growing movement of the militant working class and the nationally-oppressed peoples. In the new People’s Democracies of China and Europe, following the removal of the old ruling classes vast new opportunities are opening up of the mass of the people who are working towards Socialism. The Soviet Union, the land of Socialism, having mad=de good the enormous devastation of war and invasion is now stronger than ever and is an inspiration to people everywhere struggling for freedom.

Ireland has always played her part in the great fight for freedom and democracy; she must not remain inactive now. Our country has yet to win its national unity and independence. By an Act of the British Parliament Ireland was partitioned. This action was not seriously opposed by the quisling section of Irish capitalists which then held and once again dominates the Government of the Twenty-Six Counties. Six of our northern counties are held in military occupation, and the industries and resources of the area are directed to serve British imperial interests.

In relation to then contemporary political events in Ireland it noted that:

In the present Coalition Government we have leaders of the Labour movement acting as junior partners to Fine Gael – notorious in Irish history for its shameless betrayal of the national struggle, its consistent support, both in and out of power for big business and ranching interests, and above all, its organisation of the Fascist Blueshirt movement.

It looks to the Soviet Union…

In this fight for freedom our prospects today are brighter than ever, with Socialism triumphant in the Soviet Union, the People’s Democracies rapidly advancing towards the same goals; unjust governments falling everywhere, not only in Europe, but in Asia and the far Pacific, and the age-old enemy of the Irish people, the British Empire…

And it regards itself as:

Notably it does not mention its fraternal party in Northern Ireland.